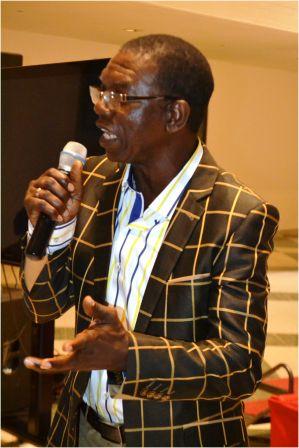 At a well attended farewell dinner held at the Bintumani Hotel in Aberdeen past Saturday evening, 20th May 2017,  the Board, Management and Staff of the Sierra Leone Commercial Bank (SLCB) bade their retired Managing Director, George Carl Taylor, a farewell befitting a selfless, trustworthy and accomplished leader. Babsy Reports.

Speaking at the ceremony, the acting Managing Director of SLCB, Idrissa Alooma Kamara, revealed to the audience that George Taylor served SLCB for nearly forty years. He rose through the ranks from being  Junior Bank Clerk at the Njala branch in 1977 to become Acting Managing Director in 2015. He climaxed his lengthy and distinguished employment with SLCB by being the first Managing Director under whose leadership SLCB posted Le39.9 billion profit from a low point in 2014. This makes SLCB to date the most profitable Commercial Bank in the country. With public trust and confidence in the integrity of the bank restored under George Taylor’s leadership, SLCB has chalked up over Le1 trillion in customers deposit, and Le1.3 trillion in assets.

The current acting MD also informed the audience that George Taylor was the first man to develop the first Operation Manual for the bank. He also developed a popuplar and a widely accepted Salone – Link Transfer Money, which allows you to send money within two minutes.

Also, giving the keynote address, the minister of Finance, Hon. Momodu Kargbo, heaped praises on George Taylor and team for a job well done. He added that George Taylor has created a legacy which he would like people at the bank to follow and build on. “ George Taylor has left a legacy, and he would always be remembered for his determined, honest and dedicated work in the country.”

Government, he added, relies on the financial institutions; and one of them he said, is the Commercial Bank.

He congratulated George Taylor and appealed to his predecessor to follow his footstep.

Also, a senior staff at SLCB, Madam Nellie Campbell in her farewell speech, summarized George Taylor’s shiny personality. She described him as a senior citizen, a man of good report, an eminent and distinguished man; an achiever, a visionary, devoted and a principled great leader.’ She added that George Taylor served the institution with utmost ‘devotion, trustworthiness and perseverance,’ beginning as Clerk 1, and grew through the ranks to become Clerk II, Supervisor, Officer 1,Officer II, Sub- Manager, Assistant Manager, Manager, Senior Manager, Director, Deputy Managing Director and ultimately, Managing Director on 1st May 2016. George Taylor, she said, was a great team player who generously encouraged participation of staff in the decision making process through allowing discussions and free exchange of ideas. With such good rapport and active cooperation of his staff, under Taylor’s stewardship, SLCB won both local and international banking excellence accolades. Management, she said, recognizes and appreciates Taylor’s valuable skills, knowledge and experience he instilled in them. ‘You have left an indelible mark,’ she said of their departing MD.

She noted that although his presence and humor will be missed, he had done a final thorough job by the handing over notes to his successor, who is himself is a good example of inspiration to staff with an ocean of knowledge; who is very proactive and with positive human qualities – Idrissa Alooma Kamara.

In his farewell speech, George Taylor gave thanks to his wife and management for their support. He called on the government to continue to give the bank a free hand, and for the succession trend to continue; noting that the worst year for the bank was 2014. He called on staff to emulate his footstep; not to engage in fraudulent activities that would send the bank under.

The event climaxed with lots of funfair.

Do We Have a Ministry of Country a...