Njala demonstration stretches Legal Aid Board to the limit 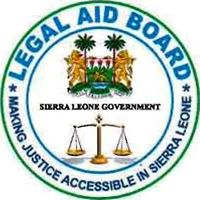 Njala demonstration stretches Legal Aid Board to the limit

The Legal Aid Board office in Freetown was stretched to the limit following the storming of the office by desperate students of the Njala University seeking the intervention of the Board to secure the release of their colleagues who had been arrested and held in police cells around the city.

On a normal weekday, you would expect at least forty people crammed in the Freetown office to seek the services of the Board. The situation on Thursday, March 23 was characterized by mild chaos as too many students wanted to visit the office to provide updates on students arrested by the police.

The team of Legal Aid Board staff comprising Bankole Morgan and Anthony Karim Kamara negotiated the release of five of the six students detained at the Central Police Station. One was not released because of an alleged inflammatory statement to bring the city on its knees.

The Executive Director of the Legal Aid Board, Ms. Fatmata Claire Calton-Hanciles, cancelled some engagements to be on the phone with senior police officers in the city to secure the release of students. She spoke with the Inspector General (IG)  of Police Francis Alieu Munu, the Local Unit Commander (LUC) for Lumley, Chief Superintendent Shyllon and the Regional Commander West, Assistant Inspector General of Police (AIG) Kelie.

Ms. Calton-Hanciles and IG Francis Munu spoke about the demonstration and the fact that the student leaders who visited the office including the PRO for the National Union of Sierra Leone Students (NUSS), Michael Mitchell Conteh have shown remorse.  IG Munu assured that the police would release those they do not have any evidence against.

The Bo office also had a fair share of the turbulence as the staff had to close the office for their safety and work from an undisclosed location. The Board staff worked with the Southern Province Security Committee Members to restore calm in the township.  Kenema Town also experienced some disturbances, but the office managed to remain open to the public.

Meanwhile, Ms. Calton-Hanciles has written to President Ernest Koroma to intimate him on the Board’s intervention in representing the students as its mandate demands. Also, the Board has prevailed on the students to keep the peace and stop all demonstrations as we await the University Senate decision on the matter. ‘We pray your speedy intervention into a swift resolution of this matter,  as the students have a matter of days, after which it becomes practically impossible for them to have their academic year on course,’ the letter reads.

Sierra Leone Gets a Dynamic Young...