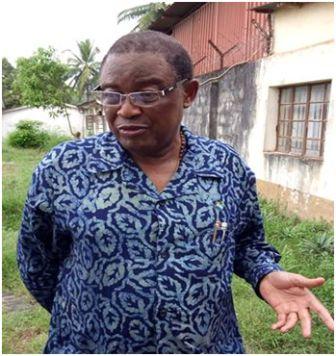 Bleser declared that the increasing water scarcity is a key challenge of the future. In order to achieve a more sustainable use of water, all relevant stakeholders must make their contribution and work together across all sectors. The multi-faceted agricultural challenges, which are of central importance for careful handling of clean water can only be solved together.The production of food for food security must also be ensured in the future.

The Berlin World Food Conference c/o the GFFA within the International Green Week was attended by 60 Ministers of the world. Sierra Leone’s Minister of Agriculture, Forestry and Food Security, Prof. Monty Patrick Jones who was now in Berlin, Germany for the International Green Week represented the Republic of Sierra Leone in the said conference together with Dr. Joseph M. Kargbo, Director-General of the Sierra Leone Agricultural Research Institute (SLARI).

The Conference negotiated and discussed on the draft text of the GFFA Communique 2017 which needed to be finalized in order that it can be adopted on Saturday, 21 January 2017. Starting with the Preamble of the Communique, the whole body carried through the discussion of the draft text which included four challenges to safeguard the supply and access to safe and nutritious food for a growing world population.  They are: (1) enhancing access to water; (2) improving water quality (3) reducing water scarcity risks and (4) managing surplus water.

This year’s GFFA – The Berlin World Food Conference aims to stimulate discussions on the role of agriculture in the sustainable management of the valuable resource and to formulate concrete recommendations for action. One of the relevant Expert Panel Discussions participated by in by the Sierra Leone delegation headed by Minister Monty Jones was that of “Innovative regional and national approaches to efficient water use in agriculture in Africa hosted by the German Africa Business Association. Among the discussion matters was the water management project regarding the Senegal River introduced in that country to control the availability of the river for food sufficiency, income, etc. For the Sierra Leone Minister Jones this project presents a perfect example that there is great potential to exploit regional collaboration particularly where major rivers cut across countries. There is need to tap real water in abundance during the rainy season, conserving it for use during the dry season to ensure sufficient water all throughout the year.

Finally, in the evening German Federal Minister for Food and Agriculture Christian Schmidt formally opened the 82nd International Green Week. In his address before industry representatives and international invited guests he expressly thanked the farmers in the Berlin City Cube saying: “They, dear farmers, are the most important professional group because they create the basis for our lives. They secure our daily bread and cultivate our unique cultural landscapes.”