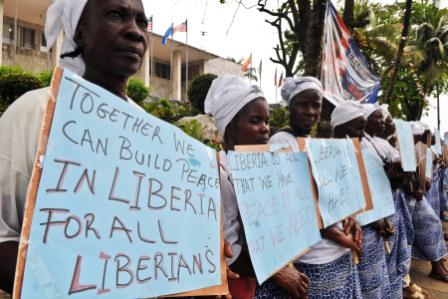 A Liberian women’s peace movement led by 31-year-old Leymah Gbowee did something extraordinary in July 2003 to force Liberian warlords to sign a peace agreement that ended 10 years of a bloody civil war. (Liberian women promote messages of peace and non-violence during the 2011 elections in Liberia. Photo UN/Photo Emmanuel Tobey)

After months of fruitless negotiations, hundreds of women, members of Women of Liberia Mass Action for Peace, gathered at the venue of the peace talks in Accra, Ghana, and sat at the entrance to the conference hall. They looped their hands and vowed to stop the warlords from leaving the venue until they had reached a peace agreement.

Security guards attempted to arrest Ms. Gbowee for obstruction, but she was not about to go without a fight. “Let me make it easy for you,” she told the guards. “I am going to strip naked, right now, and you can take me to jail.” As she began to undress, the security guards ran away. In Liberian and Ghanaian cultures, it is a taboo for men to see a naked woman in public.

Soon after the warlords and rebels softened their positions and signed a peace agreement. United Nations peacekeepers later disarmed and reintegrated more than 100,000 combatants and conducted general elections.

Mostly for her efforts in mobilising women to help end the war, Ms. Gbowee (and Liberian

The Liberian women’s struggle and ultimate success suggest the potential power of civil society in Africa. Civil society has provided an opening for youth seeking employment opportunities and democratic reforms in many countries, as in Liberia and in the countries of the Arab Spring in 2010 and 2011, when young people organised themselves on social media and utilized civil disobedience that unseated the governments in Tunisia and Egypt. A wave of unrest followed in Algeria, Jordan and Yemen, among others.

Civil society organisations (CSOs) also function as watchdogs of accountability. In 2013, Kenyan citizens were so angered by an effort by members of parliament to increase their own salaries and allowances that they brought about a dozen blood-soaked pigs and piglets to parade in front of the parliament building.

Boniface Mwangi, a photojournalist-turned-activist and organizer of the Occupy Parliament march, referred to the MPs as “Mpigs,” highlighting the parliamentarians’ unprincipled appetite for money. “We have spilled the blood on the pigs to show that the MPs are greedy,” said Mr. Mwangi.

A study by the UK-based Independent Parliamentary Standards Authority and the International Monetary Fund revealed that Kenyan MPs’ basic pay was 76 times that of the country’s GDP per capita. That gap is second only to Nigeria’s in global ranking. This buttressed CSOs’ opposition to the pay raise. After the “bloody pigs” spectacle, the MPs accepted $6,300 per month instead of the $10,000 they had initially requested. Even President Uhuru Kenyatta directed the salaries commission to slash his salary from $340,000 to $185,000 per annum.

The Kenyan CSOs declared victory, although some Kenyans saw the result as insufficient. “Slashing the salaries of MPs or that of the president is just a drop in the ocean,” said Verah Okeyo, an award-winning Kenyan journalist, in an interview with Africa Renewal. “The wage bill is still too high. The MPs make the news, but civil society still has a lot to do to make government accountable.”

The World Bank lists the key elements of good governance as open access to information, efficient public-sector management and the adoption and implementation of policies that benefit citizens, among others. Nongovernmental organizations and community- or faith-based organizations, among other groups, usually find themselves forced to adopt a confrontational approach to make governments enact policies that benefit the citizenry.

The Arab Spring involved citizens mobilising to demand social justice, free elections, and the reform or replacement of autocratic governments. Grassroots movements such as Y’en a Marre (We’ve Had Enough) in Senegal, Le Balai Citoyen (the Citizen’s Broom) in Burkina Faso, and the Black Monday Movement in Uganda took their cue from the Arab Spring, employing citizen action to achieve good governance.

In a collection of essays titled Good Governance and Civil Society Participation in Africa, published by the Addis Ababa-based Organization for Social Science Research in Eastern and Southern Africa in 2009, civil society’s oppositional role is viewed as an effective strategy for dealing with intransigent governments.

Governments with enormous powers to control the socioeconomic life of citizens are feeling greater pushback from civil society. Also, across the continent, civil society organizations are more openly playing their watchdog role.

In his 2008 book, The Rise of Global Civil Society, evangelical public policy expert Don Eberly, former deputy director of the White House Office of Faith-Based and Community Initiatives under former US President George W. Bush, affirms civil society’s important role. “The health of a republic is dependent on the vitality of civil society and the voluntary actions of people.”

The 2014 CSO Sustainability Index for Sub-Saharan Africa, developed by the US Agency for International Development (USAID), commends CSOs for performing a vital function in providing services and materials to needy populations. In contrast to the varied attitudes of authorities towards advocacy organizations, nearly all surveyed countries reported that governments generally recognize and approve of CSOs’ service-providing role.

Many CSOs in Africa partner with governments on development issues. In March 2015, for example, 60 participants, including representatives of African governments and CSOs from across the continent focusing on good governance, met in Addis Ababa and agreed to jointly fight corruption on the continent.

However, there are CSOs, such as Burkina Faso’s Le Balai Citoyen, that work to expose ills in society and are reluctant to work with governments. Some governments criticize such CSOs as focusing on bad situations to attract foreign funding.

These governments perceive CSOs as “foreign-funded agents of the opposition.” That was an opinion heard at the US-Africa Leaders’ Summit, organised by President Barack Obama and the White House and held in Washington DC, in August 2014 for African heads of state and government in good standing with the US, African and US business leaders, and private-sector and nonprofit organizations.

Egypt and Morocco, for example, forbid CSOs from engaging in “political activities,” according to a USAID report titled CSO Sustainability Index for the Middle East and North Africa. Without a clear definition of what political activities are, activists fear arbitrary enforcement of laws that restrict civil society activities.

In short, African CSOs face the twin challenges of inadequate funding and hostile governments. This has led some donors to work directly with CSOs instead of governments. Andris Piebalgs, a former European Commissioner for Development, says that between 2007 and 2013, the EU funneled €5 billion ($5.5 billion) of its development aid to Africa through CSOs.

CSOs can receive significant amounts of funding depending on their areas of focus, says Ms. Okeyo, the Kenyan journalist. CSOs dealing with health and social issues such as HIV/AIDS, reproductive health and the rights of women usually get more funding than others, she added.

One way for CSOs to achieve financial independence is for donors to move away from funding grant-specific activities and instead shift to a model of investing to create local trust funds that will sustain organizations, suggests Natalie Ross, former programme officer at the Aga Khan Foundation USA, which funds African CSOs involved in poverty-alleviation activities.

Benson cites the example of the Voice of Addis Chamber, a radio station in Ethiopia that received seed money from CIPE but is now able to sustain itself through advertisements and private sponsorships.

Some CSOs are successfully sourcing funds locally, notes USAID. In Egypt, the Gozour Foundation for Development, which supports poor communities, receives funding from Egyptian banks — Barclays and Commercial International Bank. Other faith-based organizations, including the Coptic Evangelical Organization for Social Services (CEOSS), which promotes social justice and intercultural harmony, and Caritas Internationalis, a global confederation of over 160 national Catholic charities that supports poverty-alleviation efforts, also depend, to some extent, on local funding.

Other income-generating avenues available to CSOs are membership and services fees and the sale of products such as carpentry, prints or crafts.

Despite the successes of the Voice of Addis, Caritas and others in gaining local funding, CSOs still need external help, says Flora Oyakhilome, the community mobilization officer at the at Edo State Agency for the Control of HIV/AIDS in Nigeria. “It is difficult getting support locally, most civil society organizations will tell you. And funding from abroad is not coming like before. Our work is suffering.”

Faced with sometimes hostile governments and with foreign funding drying up, African civil society groups are battling to survive the tough times. But they will continue to strive to improve their societies. “This is what we live for,” says Ms. Oyakhilome.

Things for Apart: The Republican P...