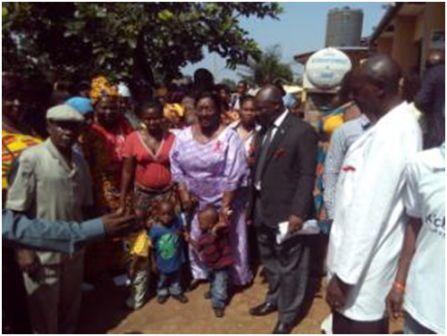 The First Lady, Mrs. Sia Nyama Koroma has on Tuesday launched four thousand HIV/Syphilis rapid test kits for pregnant women at the Dworzark Farm Health Centre in Freetown. The kits are aimed at eliminating mother to child transmission of HIV and Syphilis in the country. The all-important launching part of this year’s commemoration of World AIDS Day and it was done by the National HIV/AIDS Secretariat in collaboration with key partners like the United Nations family and Office of First Lady.  (Photo: First Lady launching the test kits )

Addressing the ceremony, the Director General of National AIDS Commission, Alhaji Dr. Momodu Sesay said the two infections are transmitted through sex, and it therefore warrant the need for pregnant women to take the test so that they will save their own lives and that of their unborn baby. Syphilis, he said is curable and when diagnosed earlier it reduces the chance of getting HIV.

Dr. Sesay said the test will be done confidentially. “We are grateful that the First Lady Championed the delivery of the test kits, which will go in long way in saving the lives of women and their babies,” he said, and added that this is an opportunity pregnant women should not let go free.

The First Lady, Mrs. Sia Nyama Koroma revealed that she was part of a First Ladies’ Conference where they agreed on the Vision 2030, which is geared towards ending HIV in the World. “Whenever you have singns and symptoms of syphilis please go for the test and treatment immediately,” she encouraged Pregnant Women present, and added that they should serve as Ambassadors to take the message across to others.

Madam Sia Nyama Koroma encouraged the Private Sector to come onboard so as to sustain the project.

The United Nations World Health Organization’s Country Representative stressed the importance of taking test in order to prevent still births in the country.

Anderson Nordstrom said the provision of the test kits is part of the Post-Ebola healthcare support to pregnant women. He pledged his organization’s continuous support to keep the people healthy.

UNAIDS Country Director, Dr. Michael F. Gboun said since Ebola has ended in the country all should play their part to prevent deaths amongst pregnant women. He said the test is important because they want to put all pregnant women on HIV treatment if positive.

The Member of Parliament for Constituency 109, Hon. Amadu Fofanah commended the First Lady for her commitment and care in solving the plights of women and girls, which has contributed to a healthy society.

The Dworzark farm Health Centre, he said is currently serving four communities, namely Dworzark Farm, New England Ville, Sumaila Town and part of Brookfields. “Nurses and Doctors in the Hospital have worked hard in saving the lives of people during and after Ebola,” he said, and further states that more support is required so that the Health Centre gain hospital status.

Speaker after speaker encouraged pregnant women to make use of the health centre for safe delivery and other antenatal care.

The kits were delivered by Mr. Samuel Johnson, the Operations Manager of Logistics Solution and Services, which is an exclusive distributor for ALERE and Standard Diagnosis in Sierra Leone, on behalf of OAFLA Sierra Leone. The donation, he said is to eliminate mother to child transmission of HIV and syphilis in the country, and it is to support the Agenda for prosperity in the health sector.

US based Sierra Leonean promotes e...