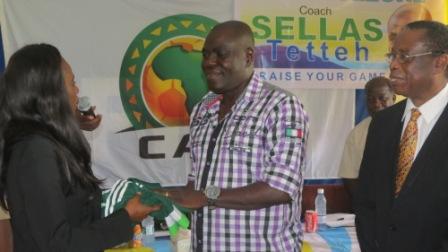 Ghanaian Sellas Teivi Tetteh has been unveiled as care-taker coach of the national team of Sierra Leone, Leone Stars for three months.

Speaking at an unveiling ceremony held at the Sierra Leone Football Association Secretariat in Freetown, President of the Association Isha Johansen said coach Tetteh is coming in due to the absence of funding from government and a suitable coach for the national side.

“There is no agreement, this is done out of good will and solidarity by the Ghanaian Football Association to help us he is coming in the absence of funding and a suitable coach” she said.

Isha said the Football Association is currently sourcing funds from the Private sector and they are grateful to their Ghanaian counterpart for providing Tetteh on what she described as a loan to help train local coaches and build a formidable national squad for the upcoming World Cup qualifiers.

“Tetteh is vast on African Football, he will serve as a care-taker coach as well as to help impact knowledge on our local coaches,” she noted.

Coach Tetteh said his new job is a very big challenge with a lot of difficulties which he will have to go through as a care-taker coach and will need the utmost support of the relevant stakeholders.

He said he is aware of the challenge and has already started preparations with a preliminary report to the Football Association on early preparation as a national team.

“The talents are here but there are challenges and we need to work together to get over them if we want to build a formidable squad, we have three weeks to our first match against the defending Champions of the African Cup of Nations Ivory Coast,” Tetteh lamented.

He confirmed that he will be working with the local coaches to build on their capacity and work with them in building the squad because they know the players.

“I want to leave a foot print here, this is team work and everyone is important, the media as well as the fans, we need to build their confidence in the team and I have what it takes,” Tetteh confidently noted.

Coach Tetteh who was accompanied by the Ghanaian High Commissioner to Sierra Leone Major Retired Major General Carl Modey [RTD] registered his appreciation to the President of the Ghanaian Football Kwesi Nayantakyi Association for recommending him for the appointment.

58-year old Tetteh was former Head coach of the Black Stars and Rwanda and until his appointment he was Head Coach of Ghana U-20 squad.

His first match in charge of Leone Stars will be against Ivory Coast on 5th September in a 2018 World Cup qualifying fixture in Lagos, Nigeria as Sierra Leone cannot hold matches at home due to the Ebola epidemic.

Meanwhile, Alhaji Unisa Alim Awoko Sesay Interim Chairman of a splinter group within the association condemned the coming of Coach Tetteh. He said the process was not properly done as they were not involved nor the Ministry of Sports in a bilateral relationship with the Ghanaian FA.

“Isha is impersonating as President of the Football Association and we will not recognize her, she is just diverting and don’t want to work with other people even with the intervention of President Koroma,” Awoko said in a brief telephone interview.

The Ministry of Sports was conspicuously absent at the unveiling ceremony and the Deputy Minister Ishmael Al-Sankoh Conteh however declined to speak on the issue when contacted.

“Paul Kamara is the best to speak on that matter I will not comment on it,” Al-Sankoh said.

“The Minister Paul Kamara has been duly informed and we will be presenting Coach Tetteh to him during the week,” Chris said.

To this ongoing divide in the administration of football in the Country, coach Tetteh said he hope the parties involved will see reason and work together for the good of the game.

“I know there is a little bit of misunderstanding, am not too worried about it and only hope it will be resolved,” He said.

Zuaid Kudsy sport analyst said with the task ahead is too big to hire a coach for three month. The challenges are enormous in terms of administration and technicality, our football is in a mess and needs a complete overhaul.

“No coach will solve this problem in three months time, we need to build a squad for the future not an immediate solution, I have tremendous respect for Tetteh but I pity him if he fails,” he noted.