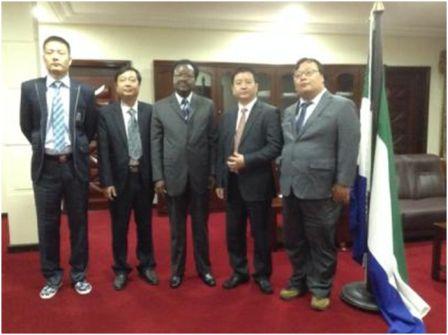 Freetown, August 11 (SLENA) – A delegation of investors from the Peoples Republic of China on Monday this week called on the Vice President, Ambassador Victor Bockarie Foh at his Tower Hill office in Freetown where they disclosed their interest in investing in the country.   (Photo: Vice President Foh (centre) hosts Chinese visitors)

In his welcome address, the Hon. Vice President expressed on behalf of His Excellency, Dr. Ernest Bai Koroma, the government and the people of Sierra Leone his profound thanks and appreciation to the government and people of China for their contributions and participation in the fight to stamp out the noxious Ebola disease in the country.

Vice President Foh encouraged the government of China to continue to support His Excellency, Dr. Ernest Bai Koroma in order to effectively manage the implementation of the Post Ebola Recovery Plan.

“I want you people and China to help His Excellency, President Koroma to succeed,” VP Foh emphasized.

Speaking on the request made earlier by the investors, the Hon. Vice President said he was excited that the investors saw potentials in the country for investment, adding that he had already conveyed their message of partnership to the government to His Excellency, President Koroma especially that of a land for the construction of an industrial complex in the new Airport City, Mammama and the fishing industry.

He assured the investors that the Ministry of Lands will provide them with the said land , adding that, their interest in the fishing industry would be very well received by the government and that the Minister of Marine Resources will give them such an encouragement.

“As long as you take your licenses and abide by the laws of the land you will have no problem with government,” he assured.

The Hon. Vice President went on to encourage the investors to embark on Low Cost Housing industry, guaranteeing them of government support and encouragement.

He also called on them to assist in funding the construction of a community hospital in Jimmy Bagbo, Bo district as the project is part of the Post Ebola Recovery Plan to strengthen the Health Sector of the country.

The Commercial Councilor of Shangai Office in the Commercial Section, Embassy of the Republic of Sierra Leone, Fia Nian Jie pledged his government’s commitment in the implementation of the country’s Post Ebola Recovery Plan.

He assured the VP of his country’s assistance in the construction of the community hospital in Jimmy Bagbo.