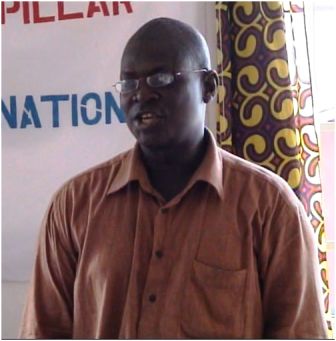 Authorities of the Bonthe District Ebola Response Centre have raised serious concerns over the constraints they are facing with regards to facilities in order to contain the spread of the dangerous Ebola virus to the Attitudinal and Behavioural Change (ABC) Secretariat during the Secretariat’s Nationwide Ebola Education and Enforcement and preventive measures for the eradication of Ebola in the country.  (Photo: Mr. Harold Foday Kamara, Bonthe DERC Coordinator)

According to the Coordinator for the District Ebola Response Centre (DERC), Mr. Harold Foday Kamara they are working very hard to ensure that they contain the spread of the disease in the district but are gravely inhibited with the requisite logistics, ”our two holding centres are not equipped to be considered as Ebola holding centres and I wonder what will happen if we have larger number of cases” he said.

The Coordinator noted that the National Ebola Response Centre (NERC) is not responding to their requests promptly, he said the district should not be disregarded because of its low number of cases at the moment, noting that Bonthe should be well equipped to face a rising number of Ebola cases in the district.

Speaking to the Secretariat, the DERC Logistics Officer for the district Mr. Peter Lansana informed the ABC team that the district did not have storage facilities for drugs, ”because we do not have enough storage facilities, we are storing Free Health Care and Ebola drugs in the same place plus food and provision for quarantine homes” he emphasised, and cautioned that such a practice is not good for the whole fight.

Mr. Lansana disclosed that they are also suffering from transportation problem as the district have only two vehicles for their operations, and that they have no ambulance to transport patients in the reverine area and discloses that they will spend almost a drum of fuel (144 gallons) if they want to cross the sea to attend to calls relating to Ebola cases.

The District Logistics Officer for United Nations Children’s Emergency Fund (UNICEF) Mr. Emmanuel Bernard reiterated that exposing drugs to sunlight and storing Free Medical Care and Ebola drugs in the same place is not the best practice for drug protection and storage, and that for Bonthe District the storage of food items particularly food for malnourished children which has ingredient such as peanuts may attract rodents.

Paramount Chief (P.C.) Alhaji Alie Sheriff of Jong Chiefdom, Bonthe District commended the efforts of President Ernest Bai Koroma and the government for its strides towards the fight against Ebola, noting that the President has shown great concern for his people by moving from one district to another educating the people about the need to eradicate Ebola in Sierra Leone. He also commended the medical personnel and Non Governmental Organisations such as World Vision, Red Cross and others for their financial and professional support in trying to curtail the spread of the epidemic.

P.C. Alie Sheriff disclosed that the government had given him Twenty-Eight Million Leones (Le 28,000,0000) so that he can lead the fight in his chiefdom. He explained that he had started holding meetings with his Section Chiefs and other stakeholders on how the money should be used judiciously, and that they have formed a robust taskforce and that will also be replicated in every section and town.

The District Nutritionist Mary Koroma revealed that she is facing a lot of challenges in doing her job, and disclosed that the district had got food shortage even before the last households were quarantined but that they were very lucky to have been supported by the Community Evangelism Organisation, she disclosed that if there is more households to be quarantined they will be unable to meet their needs because of insufficient provision and food supply.

She mentioned the challenges of mobility; lack of vehicle and speedboats  to transport food to quarantined homes and the holding centres. She hoped that Ebola did not spread across the island because it will be difficult to respond to such a situation. She added that the district did not have a paid up cook for the workers and patients at the  holding centres, and called for additional staff to assist her in the food distribution.

The ABC Secretariat also visited the dilapidated holding centre with little or no facility in Matrue Jong which has been housing suspected Ebola patients in the mainland. Speaking to the Secretariat, the Matron for the United Methodist Church Hospital in the township that has been working in the centre, Naomi Makieu stated that the centre is not up to standard because it did not have the required facilities of a holding centre.

”If this holding centre is well equipped we will turn it to a treatment centre because we have well trained staff” she stated, and registered her strong determination to further her studies on hemorrhagic fever and to perform her duties as a professional nurse for the health of the people of Bonthe and the country as a whole.

The World Health Organisation (WHO) Representative for the district, Dr. Francis Smart spoke also on the poor storage facilities and lack of facilities in the holding centre in the district, he therefore appealed to the government and development partners to immediately come to their aid. He noted that the district is able to contained the spread of the virus because of community participation and their robust surveillance team.

The head of the Surveillance Pillar Mr. Charles R. Lissa explained that they have an active surveillance team that do respond promptly into every alert, ”what we always do is that we trace the movements of Ebola cases and carry out immediate quarantine” he explained.

He spoke on the effectiveness of primary quarantine and secondary quarantine, citing a case where they quarantined twenty-eight households of one hundred and forty-two people just for a single Ebola case, and claimed that, that this quarantine model has been one of the key factors for their success in containing the disease in the district.

The Nursing Sister for the district, Sister Susan Tucker that represented the District Medical Health Officer, noted that when the first Ebola case was reported in the district, they were not well trained on how they should protect themselves from the virus when treating patient, but with the help of the Ministry of Health and Sanitation and United Nations Children’s Fund (UNICEF) the nurses and doctors of Bonthe are now well trained to deal with Ebola patients.

The Executive Director for the ABC Secretariat Dr. Ivan Ajibola Thomas congratulated the district for their relentless efforts in trying to curtail the spread of the virus despite their volatile situation, and stressed that the fight against Ebola calls for early preparation and immediate response, and that there is need for prompt action to be taken to salvage the Bonthe crisis.

Dr. Thomas explained that the strategy to fight the virus is positive attitude and behaviour, and the role of the Secretariat in Ebola war is to persuade people to be very positive in their attitude and behaviour towards the epidemic by observing the preventive measures that health professionals and international partners have identified. He also stressed compliance to the bye-laws which the local leaders and their communities have instituted for the eradication of the virus.

Winner from Sierra Leone to receiv...