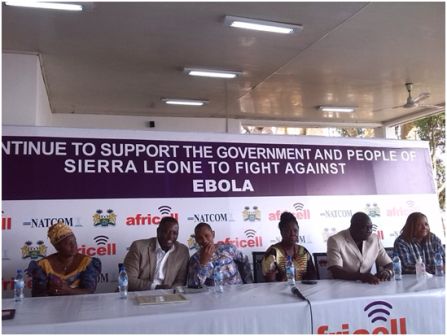 Africell continues to support the government and people of Sierra Leone to fight against the deadly Ebola Viral Disease. As Sierra Leone’s biggest mobile telecommunications company, Africell has on Friday presented a total of 1, 450 25kg of rice, and equivalent to 36, 250kilograms of rice to the National Ebola Response Center at their Wilberforce Headquarters. The latest donation brings the total quantity of rice already provided to 5, 500 25kg bags or 137, 500 kilograms of rice.

The occasion also marked the presentation of tents for construction of Ebola Holding Centers to the “Women Rise Up Against Ebola” organization; and announcement of sixty million Leones worth of equipment as support to community radio stations.

Africell’s Corporate Affairs Officer, Joe AbassBangura said the tents were donated in response to the request made by the Women Organization for the construction of 15 Ebola Holding Tent Structures for some communities in the Western Area, under the supervision of NERC. “We continue to urge all Sierra Leoneans to move beyond knowledge and awareness about the disease, to acting and end Ebola through our traditional and cultural practices,” he said.

Elizabeth Mans is the Chairperson for “Women Rise Up Against Ebola” organization; she told the gathering that the donation is a step in the right direction in the fight against Ebola. She pointed out that after a thorough assessment and sensitization conducted, they have deemed it wise to have the holding centers for prompt response. Africell’s intervention, she said will help greatly in their life-saving venture.

Madam Zulaitu Cooper, Coordinator of Ebola Response Team (Rural) expressed her happiness for the temporal tent holdingcentres, which will contribute in solving some of the challenges faced in the national response. She commended Africell for a job well done, and added that the donation will go a very long way in the fight against Ebola.

Mayor of the Freetown City Council, Franklyn Bode Gibson said the provision of food items to quarantined communities, less privileged homes and other areas significantly affected by the Ebola epidemic. He promised that the distribution of the food items will be monitored so that it reaches the intended beneficiaries. He told the gathering that his Council will undertake robust measures to break the transmission; pone of which is restrict the movement of people to Freetown.

The Deputy Speaker of Parliament, Hon. Chernor Raman Maju Bah said he is grateful to women for taking the lead in the fight against Ebola. He cited an example to the war when women stood firm against the late FodaySankoh’s activities. “I am with a strong conviction that women are ready to play leadership role in ending Ebola,” he said.

Manority Leader in Parliament, Hon. Dr. Bernadette Lahaisaid women are willing to play key roles in different spheres to end Ebola in the country. She commended Africell for the food sup[ort and also other material supports to Community Radio Stations and the “Women Rise Up Against Ebola” organization.

The citation read in part “Joe is a dynamic entrepreneur who uses his status as a national radio personality to provide information and motivate his audience to move forward during a time of crisis. As host of a one-hour daily radio show titled ‘join han for dreb Ebola’, one of the most listened to radio stations in the country; he stands at the forefront of the mass efforts to help Sierra Leoneans take action against the Ebola outbreak”.