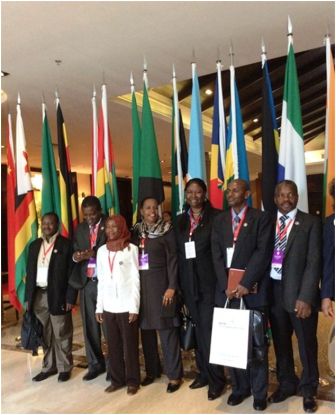 Sierra Leone’s Deputy Ambassador to the People’s Republic of China, Her Excellency Alice Kumba Momoh, has, on 13 and 14 November 2014, attended the Fifth Roundtable Conference on China-Africa Cooperation co-hosted by the Association of Former Diplomats of China and the People’s Government of Hainan Province.

The conference, held in Wanning, Hainan Province, was attended by more than 350 participants, including Second Vice President of Zanzibar of the United Republic of Tanzania His Excellency Seif Ali Iddi, officials from the relevant departments of the Chinese government, African diplomatic envoys to China, officials from Hainan Province and Wanning, Chinese entrepreneurs, experts, amongst others.

A Press Communiqué stated that the High-Level Forum on Enterprises and the Forum on China-Africa Agricultural Cooperation were held during the conference.

Further, the communiqué, stated, that “this year is the Year of Agriculture and Food for Africa. Agricultural cooperation is an important area for China-Africa cooperation and food security is a fundamental guarantee for Africa’s socioeconomic development.”

Officials from the Chinese agricultural departments and African envoys stated that it is necessary to “expand the area and scale of China-Africa agricultural cooperation and introduce China’s mature agricultural technologies, especially Hainan’s tropical agricultural technologies, to Africa to help with the development of modern agriculture in Africa and improve Africa’s food security. Chinese entrepreneurs at the conference hoped that relevant African countries will provide visa facilitation for Chinese entrepreneurs to look for investment and cooperation opportunities in Africa and facilitate visa and work permit for technical and managerial personnel of Chinese enterprises in Africa.”

The conference expressed its deep concern on the “Ebola epidemic in West Africa” and it “appreciated the fact that China immediately sent material, equipment and financial support to relevant West African countries to fight Ebola and that China also dispatched medical staff and experts to fight the epidemic together with the local people and continuously stepped up its assistance as the epidemic developed. The conference called for stronger coordination and cooperation among the international community and more material and financial support as well as medical staff to affected countries to jointly control the epidemic.”

In the words of Madam Alice Kumba Momoh, developing countries have got a lot to learn from such a conference, given the potentials for economic boom, specifically referencing Sierra Leone’s tremendous progress her development path.

Speakers from the Diplomatic Group were the Ambassadors from Ghana, Ethiopia and Rwanda, to the PR China. They all spoke on the significance of agriculture to the African population and in the words of the Ambassador from Ghana to China, “for the Chinese people, food is life, food is their culture”.  For Africans “food is a way of survival.”

Why President Koroma is still popu...