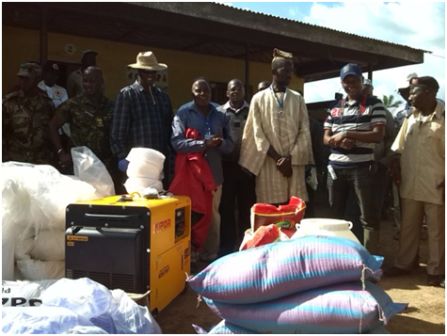 The Koinadugu District Ebola Taskforce has thrown a challenge to all that within 30 to 45 days Ebola should be kicked out of the District.

Those who do not survive the Ebola epidemic would have their houses burned in order to save others from contacting the virus, hence scaling down the spread of the deadly epidemic. A consensus was reached was reached at a General Meeting held in Kabala Town sometimes this year that houses where people die of Ebola should be burned and resources will be provided for a reconstruction. The long awaited exercise was held in Niene Chiefdom, which has become a hot spot area after the first Ebola positive cases were recorded in the district. A total of five houses were destroyed on Thursday 6th November 2014 in the presence of the Koinadugu District Ebola Taskforce. Though it may temporarily affect survivors of the epidemic, the authorities have assured of maximum cooperation to ensure that the properties destroyed are valued and houses reconstructed.

Being the second largest Chiefdom in the country, Niene happens is sharing borders with Kono District and it is reported that the first two Ebola positive cases are from Kono. The authorities have so far put the blame games behind their backs are have taking on the fight against the epidemic in order to ensure that the lives of the people are safe.

Popular Business man and philanthropist, Momoh Konteh is currently working hand on glove with the District Taskforce to ensure that the necessary supports are provided to intensify the fight. Mr. Konteh led a delegation of District Stakeholders and Journalists to Kumala Village not only to witness the destruction of the affected houses, but provide medical and other items that will help resuscitate the lives of suspected and confirmed cases. The items donated are one 5kva generator and electrical fittings for the newly constructed Ebola Center, 400 bundles of water, mattresses and beddings for health care staff, thermometers, Oral Rehydration Salt, 100 boxes of immune boosters, one bottle of nano silver, disposable plates, spoons and cups; three cows to feed those responding to treatment and the normal financial contribution to pay ex-military personnel that were recruited not only to provide security but to also provide care to quarantined homes.

The Paramount Chief of the Chiefdom, Foday Alimamy Umaru Jalloh III commended the Taskforce for the financial and technical support it continues to provide towards the fight. “Ebola cases in the District have become a catastrophe. We are only lucky to have Momoh Konteh on the forefront of the fight,” he said, noting that he is with a strong conviction that Ebola will soon be a thing of the past.

Momoh Konteh in his brief statement informed the people that the current period is a challenging one, especially for the District Taskforce, District Medical Team and other stakeholders that are working round the clock to kick Ebola out of the district. He pointed out that it is time to treat people with Ebola or other related illnesses rather than waiting for samples to be taken to Freetown, which sometimes cause delay and thereby causing deaths. “We are ready to work as a team, and to even spend our last penny to save Koinadugu from Ebola,” he said, and cautioned that whatsoever they are doing now should not be politicized.

Plans are already afoot to construct a treatment center in the chiefdom so as to ease the stress of taking patients to Freetown or other areas. To this end, Mr. Konteh informed the people that three medical doctors and twenty-five nurses will be sent to treat sick people in the chiefdom, and also 50 Contact Tracers (mainly illiterate people that are fluent in the Koranko language) will be trained in the coming days. Other speakers include the Taskforce Chairman Dr. Fasineh Samura, the District Medical Officer Dr. Francis Moses and District Council Chairman Samuel Sheku Kamara.