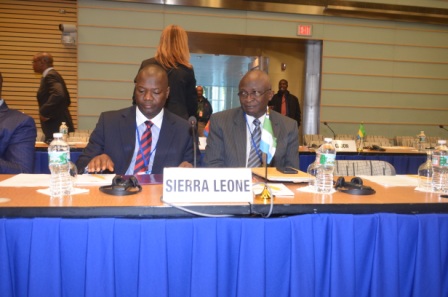 Dr. Kaifala Marah, Sierra Leone’s Finance and Economic Development Minister has appealed to members of the International Community including neighboring Countries of the Ebola affected countries of Sierra Leone, Liberia and Guinea to exercise restraint and not to isolate the trio.

His appeal came as a result of blockade by neighboring West African Countries and in response to advocates, who are calling for the isolation of the three Countries.

Speaking during a joint Press Conference together with Hon. Henry Rotich Kenyan Treasury Secretary, Hon. Bedoumra Kordje Chad’s Minister of Finance and Budget and Hon. Geraldo Joao MartinsGuinea-Bissau’s Minister of Economy and Finance, on October 11th 2014 during the World Bank Annual Meetings in Washington DC, Dr. Kaifalah Marah said the Ebola Virus Disease outbreak has reversed all the gains made by the three Countries and has “ruined our economies”.

“Sierra Leone had for the last few years been one of Africa’s fastest-growing economies. “Our growth rate for this year was set for 11.3 percent, we were doing well and our macroeconomic fundamentals were also strong. “We were doing well on roads, on energy, on tourism, and on agriculture.”

“Foreign investment flows were also buoyant as the country attracted major companies, Said Dr. Marah. Adding, “The government was even reviewing its 2035 target date for Sierra Leone attaining middle–income country status, with a view to bringing the date forward.

“Then came Ebola in May, and everything was reversed”. “Ebola has made me (Dr. Kaifala Marah) appreciate and begin to understand that fragility is self-reinforcing: because if we had had the right infrastructure, the right institutions, and the right human capacity to be able to confront Ebola, we would not have suffered as we have.”

The Hon. Minister said mining companies were cutting back operations in Sierra Leone and manufacturing activities declined. “Cocoa and coffee, which account for 90 percent of agricultural exports, is also at the bottom now, because people have abandoned their farms—everybody is running away from Ebola. Construction is also bad, because many of the contractors have abandoned their sites.

“Tourism is down 50-60 percent. Air travel is about to stagnate and strangle the whole sub-region.

“We have been isolated. “Whether that is a global best practice or strategy, someone has to advise us: but it really is killing our economies,” Said Dr. Marah, adding that the isolation amounted to an “economic embargo” on the sub-region.

Dr. Marah welcomed the international response to the Ebola outbreak, and described the response as “slow”. “It has been late, but we are delighted that the world has recognized that Ebola is not only a sub-regional thing: it’s a global challenge to humanity.”

According to Hon. Henry Rotich Kenyan Treasury Secretary, Ebola outbreak is having a spillover effects in East Africa.

“In Kenya, we have had tourism cancellations which have affected our growth, and we have revised our growth down this year.” Kenya’s position as a regional hub means it has seen transportation being affected by Ebola effects, and this is affecting the overall growth outlook.

According to him, the Kenyan government is worried about the economic prospects in the euro area—destination for most of Kenya’s exports. Strong growth in sub-Saharan Africa, another key Kenyan export market, could also weaken as a result of the Ebola outbreak, and this is also an area of potential vulnerability for the Kenyan economy.

Hon. Bedoumra Kordje Chad’s Minister of Finance and Budget, underlined security as a factor affecting economic growth in Africa. “Stability is an issue for much of Africa, and we must integrate this into our analysis and evaluations.”

The Minister said Chad is ready to champion this cause because the country is in its longest period of stability since independence, and the country is reaping the rewards of its achievement.

Geraldo Joao Martins Guinea-Bissau’s Minister of Economy and Finance, said his country is enjoying a “peace dividend”.   A spirit of national reconciliation had been generated by the inclusion of elements of the political opposition as part of the government.