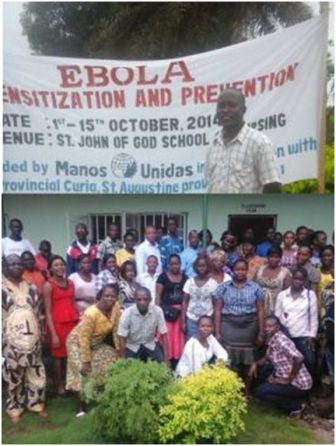 A detailed training that lasted for two weeks was organized by the Saint John of God Catholic Hospital that is otherwise known as Mabesseneh Hospital in Lunsar Town. It can be recalled that the hospital recently lost in Madrid, Spain a long serving Spanish Doctor who contacted the disease during his dispensation of humanitarian work at the hospital in Lunsar.

The Hospital Management, which at present took the decision to close the hospital activities to the public for the time being have stepped up to organizing the two week long training.

The Communication Officer who also doubles as Chief Organizer, Joshua Sandy said the training is on management of patients on infection control and care during Ebola outbreak. The training, which started on 1st October 2014 targeted topics like standard universal precautions, isolation precautions and transportation of suspected client, disposal and care of solid equipment and supplies, fumigation, disinfection techniques and waste management, triage screening, psychosocial needs for clients.

One of the facilitators of the training, Gibril Conteh death with standard and universal precautions. He emphasized on the fact that health workers in the dispensation of duties more so at times like this need to be vigilant and show alertness and regard every patient in the hospital as suspect.

He stressed that even though there have always been challenges on the availability of Personal Protective Gears, but every health worker should ensure that he or she follows the standard precautions at any time during work.

He highlighted on the fact that most health workers died because of human relations and empathy for people who are suffering but said the government as such as the hospital don’t want to lose any more health worker as it is never ideal for the fight against the epidemic.

Dr. Sandy who is the Medical Director of the Hospital and Chief Trainer talked about the trage and screening which to many present is a very new thing to be implemented in the hospital which was long known for its humanitarian support in the health sector with no boundaries of who and what a individual is and where they are coming from.

The triage and screening point is established to ensure that patients coming in the hospital are thoroughly checked and differentiated by Ebola suspect or probable from thoise with the disease conditions.

A special place in the entrance of the hospital has been identified to be used as triage and screening point. He pointed outr that no patient comes in without going through this point and that he expects that as Lunsar is is being a volatile place for Ebola, there should be probable and suspected cases on a daily basis identified at this point.

Dr. Sandy also stressed that he will be very vigilant to monitor strict implementation of what is been taught at the training. He said it is incumbent on the hospital management to ensure that health workers are protected to the fullest.

The Hospital Manager, Brother Michael Musa Koroma read out clearly the emphasis o the by-laws that were agreed on by all with sanctions for anyone found bridging any of the laws agreed on. He stressed that in as much as he will go all out to provide the necessary support to ensure every staff has adequate and needed tools to work in a standard health environment, he will never take it lightly with any health worker who deliberately or otherwise neglect any of the standard precautions thus breaking any of the bylaws.

He said it will be of no value for the training if at the end when the hospital reopens to the public health workers get infected again posing a very serious threat to infecting more people within and outside the hospital.

Bro. Koroma pointed out that the hospital was long time regarded as the safest place to be at all times, even during the war. He added that this is wants to continue during this Ebola crisis that has posed so many threats in the country.

The Communication Officer, Joshua Sandy has been delegated with the task to fully ensure that the bylaws are followed to the fullest. He said such task is tedious but feels capable to handle it. Sandy called on the public to understand show much understanding as the hospital is this time round trying to handle the pressure and challenges ahead when it reopens again to the public. He said the community should be ready to comply with the regulations, particularly the triage and screening. Mr. Joshua Sandy stressed whatever has been put in place it in the interest of protecting people from being infected as much helping those who are already infected to be identified and get supportive treatment. Mr. Sandy also announced that Mabesseneh Hospital has provided an ideal place for construction of a holding center that is currently under construction.

He cautioned that the DHMT should ensure that it follow strictly the agreement of not keeping suspected cases for more than 24 hours, and thereby encouraging congestion that might pose a threat to the hospital community.