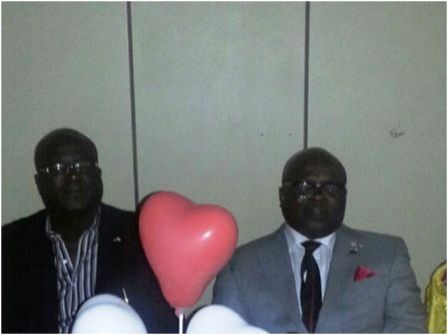 Sierra Leone’s Ambassador to Germany, H.E Jongopie S. Stevens has told Sierra Leoneans that it is their responsibility to support the fight against Ebola regardless of their political or ethnic affiliations. (Photo: Ambassador Stevens and Hon. Balogun Koroma)

“I urge you all to join hands and help eradicate the current Ebola Virus Disease that is killing our people in a shocking scale,” he admonished a mammoth crowd of his compatriots and friends at the Western German city of Frankfurt am Main past Saturday.

He was speaking at a fundraising event organised by the All Peoples Congress Party (APC) Chapter in Germany to support the fight against the deadly outbreak.

Ambassador Stevens said more efforts were needed from both the international community and Sierra Leoneans at home and abroad to fight the scourge which to date has killed some 3400 people in Sierra Leone, Liberia and Guinea respectively.

He emphasized that the virus is no respecter of mankind hence the need for collaborative efforts from all partners including Sierra Leoneans to wage war on what he described as an increasingly bothersome appendage.

He lauded the efforts and commitments of the APC Germany Chapter and other concerned Sierra Leoneans who have been extremely instrumental in mobilising resources to fight the deadly outbreak in the country.

A cross section of the audience in Frankfurt

“This is our country and we should not sit back and watch our people die,” he noted, stressing further that every Sierra Leonean abroad has a relative back home  which is why collective efforts by all in the Diaspora is needed to contain the disease.

He implored all those soliciting funds for the fight against Ebola to use them judiciously and for the intended purpose.

Since the outbreak occurred early this year, H.E Jongopie Stevens went on, the Embassy of Sierra Leone in the Federal Republic of Germany has been in constant engagement with the German Foreign Office and other partners to solicit support towards the fight against the disease.

The international community including other organisations have stepped up efforts to help fight the disease but indications are that the situation is getting worse on a daily basis which is why extraordinary measures are required to eliminate the plague.

Giving an overview of the situation in Sierra Leone, the Minister of Transport and Aviation who doubles as the national and international coordinator for the All Peoples Congress Party, Hon. Leonard Balugun Koroma thanked the organisers of the programme and highlighted the negative and devastating impact of the virus to the country’s economic and social infrastructure.

He cited the cancellation of international flights by airlines operating in Sierra Leone as a result of the Ebola outbreak. The Minister said such a situation never happened during the decade long civil conflict in Sierra Leone.

“During the war, airlines were fully operational but this has not being the case with the current Ebola outbreak.”

He further disclosed that his visit to Europe was mainly to engage with international airlines and encourage them to resume their operations in Sierra Leone.

After fruitful discussions with relevant authorities of the respective airlines, the Minister disclosed that Air France, Gambia Bird and Kenya airways have registered willingness to start operations in the country as soon as possible. Such a move, he said, will restore confidence and optimism in the minds of the people of Sierra Leone and the world at large.

While emphasising the crucial role played by his Ministry in the fight against the disease, Hon. Koroma said measures aimed at limiting people’s movements and transmission of the disease have since been introduced within the transport sector across the country.

Other measures include the screening of passengers at the Lungi international airport which has been a success story as according to him, no approved Ebola case has come through the Sierra Leone airport to Europe and elsewhere in the world.

Reiterating and emphasising government’s relentless efforts in containing the outbreak, the Minister equally acknowledged the contributions of Sierra Leoneans in the Diaspora in soliciting support towards the fight against the virus.

“I am impressed with your initiative particularly when you are mobilising and identifying yourselves to give a hand to the country you all belong.”

While highlighting the positive response the country is receiving from the international community including Sierra Leoneans in the Diaspora, the Transport Minister expressed confidence that the virus should be a thing of the past by the end of this year.

APC Representatives from the UK, Belgium and Holland were in attendance while the indefatigable and hardworking chairman of the APC Germany chapter, Mr. Mohamed S. Bangura made eloquent remarks about his party’s strides and efforts to support the Ernest Bai Koroma’s government and the people of Sierra Leone in general.