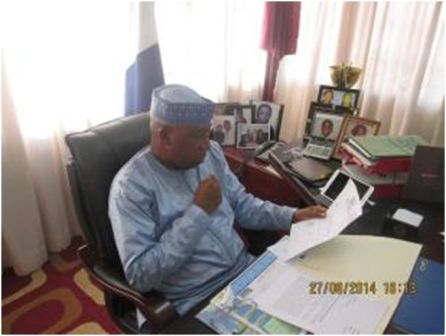 “When your neighbor’s house is on fire, help with a bucket of water” Says:- President Jammeh

The President of The Gambia Sheik Professor Dr. Yahya A. J.J Jammeh Nasiru Deen Babili Mansa has in a show of African solidarity given the sum of $500,000 to President Ernest Bai Koroma and the people of Sierra Leone as his country ‘s contribution towards the fight against the deadly Ebola virus. (Photo: Ambassador Daramy reading the diplomatic note)

The Sierra Leone Embassy in The Gambia was informed through a diplomatic note of August 26th 2014, that the Central Bank of Gambia has effect the transfer of a generous donation of USD 500.000 to the appropriate authorities in Freetown, to help in the fight against the deadly Ebola virus.

According to the Gambian President, the virus has got to a point where it has now become an emergency world crisis and Africa is suffering the most. He said it is more of an African problem than the West.

“As Africans we must take the lead and put up a show of African support. When your neighbor’s house is on fire, you should help with a bucket of water” As a result President Yayah Jammeh Mansa said his government is making this donation to a sisterly country.

This donation is an evidence of a conclusive high level discussion between Ambassador Soulayman Daramy and President Yahya Jammeh Mansa.

The career Diplomat who has served twice as State Chief of Protocol (SCOP) to President Ernest Bai Koroma, had this to say “This is a demonstration of solidarity to a sisterly country. President Yahya Jammeh Mansa gave us an environment to freely operate in especially during the sensitization of Sierra Leoneans on the Ebola Virus”.

Further commenting on the gesture of President Yahya Jammeh Mansa , Deputy Ambassador, Haja Saidata Sesay, labeled the donation as a show of genuine concern for a sister nation. “I am grateful to him as a friend indeed of Sierra Leone. This donation is like giving us hope to live. As Sierra Leoneans we will always remain grateful”

All Ebola deaths must be officiall...