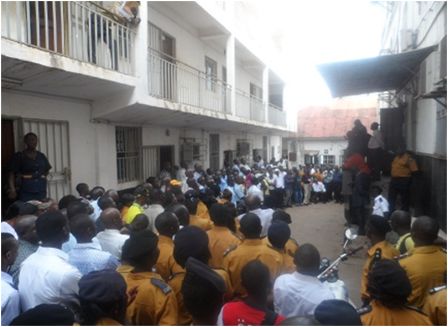 Addressing workers, Mayor informed them that he called a general meeting for staff to put more effect on their work as he has on behalf of the council signed the 2014 Performance Contract with the Government of Sierra Leone at State House last week.

He recalled that for 2012 the council took 17th position out of 19 Local Council, and in 2013 the Freetown City Council took 7th position, stressing the point that  if the Management and Staff of council put more effect on their work, FCC  is sure to score more goals, adding that Freetown City  Council is the biggest of all councils in the country in terms of its  duties and responsibilities of running and managing the city.

He informed them that performance contract targets all activities of Councils, Ministries, Commissions, Agencies NGOs etc who at the end of every year should  give account of their stewardship to government.

He also revealed to them that the Management of council has taken its decision to cut down on logistics and office supplies and at the end of the each month department of the council should present a report of their activities undertaken to ensure that more funds generated by council goes into social and cooperate responsibilities.

The Human Resources Manager, Claudious Campbell said Asset Declaration forms are out and that all staff of Council are to declare their asset.

Secondly he noted that the council has declared war on anybody or individual be it staff or visitor  that will be caught drinking alcohol  or smoking within the premises of council will be arrested.

He also said every staff of council should be punctual and at the end of the day’s work should have something effectiveness done  in the  office.

In another development, the Bethel Church Missions Team from Redding-California has visited the Mayor of Freetown, according to their Team Leader, Ken Williams he said that their mission is to move around praying for countries to prosper.

They offer prayer for Sierra Leone and for the city to proper.