Variety group donates to Hope for All SL 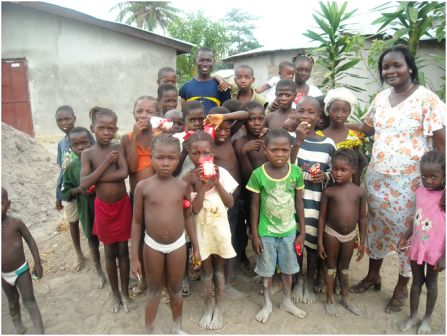 Variety group donates to Hope for All SL

The Non-Governmental Organization (NGO), Hope For All–Sierra Leone of 35 Wallace Johnson Street, Freetown that caters for street and children in slum communities and commercial sex workers on Tuesday 25th March, 2014 called for support from other well-wishers after receiving 10 chairs and 10 benches from another charitable organization, Variety Group.   (Photo: Rev. Christiana Cole & children)

The founder and proprietress of Hope For All Centre, Reverend Christiana Cole commended Variety Group for the donation which she described as timely as the school is in dire need of seating accommodation.

She revealed that the organization was established in 2004 to enhance and support street and children in slum areas in Freetown as well as commercial sex workers to become self-reliant by empowering them with income generating skills to contribute to nation-building adding that since the center was established, she has not received any support from Government or other donors inspite of the several proposals presented to NaCSA, UNDP and UNICEF among others.

According to Reverend Christiana Cole, the institution was formed on solid Christian believes through God’s revelation adding, “there are several verses in the Holy Bible where God talks to people to go out and preach His word to convert sinners. If we fail to support vulnerable children and commercial sex workers by removing them from the streets, we will be held accountable in the future for not assisting them.”

Reverend Christiana Cole further revealed that due to the lack of funds, the organization is undergoing numerous constraints as she is singlehandedly funding the organization to organize weekly feeding for the children on Wednesdays and undertake outreach programs to preach the word of God to commercial sex workers and acclaimed the owner of the structure hosting the centre, a lawyer Gooding and one Dr. Carew for their support and concern.

She further revealed that fifty children have registered for different skill trainings like tailoring, carpentry, masonry, hair-dressing and catering, others for formal education and disclosed that she has purchased four sewing machines adding that breakfast events would be organized to raise funds for the organization adding that the school has two sessions to preach the word of God and formal education to keep the children busy.

Reverend Christiana Cole also appealed to the Chief Executive Officer and Chief Finance Officer of Variety Institute of Cosmetology and Esthetic, Francis Lahai and John Kandeh respectively to enroll some of the children in their institute to learn hair-dressing.

The two officials pledged their support disclosing that the organization is implementing a similar program to empower street children, the disadvantaged and the disabled to become self-reliant to contribute to national development.

The CEO of Variety Group, Francis Lahai stated that children need empowerment for a brighter future and underscored the need for middle-level manpower development vital for the rapid growth of the country and informed that the institute was established in 2007 to cater for vulnerable children in slum areas and the disadvantaged.

Share With:
Tags
Hope for All SLVariety Group
Previous Article

Argentina and Nigeria will play a...