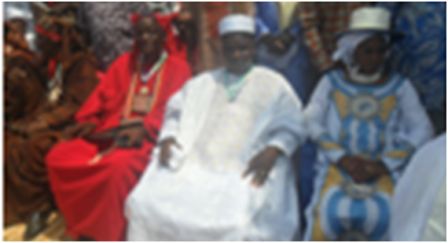 The Port Loko District Council Chairman, Ahmid Munirr Fofana did the formal handing over ceremony at a colourful ceremony in Mahera, the chiefdom headquarter town after the chief had fulfiled the traditions required by the institution of chieftaincy in that part of the country.

The Paramount Chief has been in confinement (known as (‘kantha’) with over thirty sub chiefs for approximately one month to undergo leadership skills and other types of training that would help him serve his subjects efficiently and effectively.

The programme was chaired by the Senior District 0fficer, Mohamed Sheik Kargbo and was punctuated by dozens of traditional and cultural dances in appreciation of having one of the youngest and finest paramount chiefs in the north and arguably the whole of Sierra Leone.
He defined chieftaincy as the oldest political institution in Sierra Leone and went on to explain its democratic features, adding that the process Paramount Chief Sheba Gbereh has gone through will enhance his capability in addressing crucial issues in the chiefdom.

The Paramount Chief was handed over to Hon Alie B Kamara, Resident Minister, Northern Province, who serves as the direct representative of President Ernest Bai Koroma for official recognition by Government.

Receiving the Paramount Chief, the minister spoke of the high regards the Government of President Koroma has for the institution of chieftaincy, saying the issues of sustainable supplies of water, electricity and other concerns as earlier outlined by other speakers  will be addressed in due cause.

The Resident Minister said Kaffu Bullom Chiefdom deserves a special attention not only as the gate way to the country, but largely because the people of that chiefdom are very much supportive of the ideologies of President Koroma.

Paramount Chief Bai Shebora Sheba Gbereh III was overwhelmed with delight over the huge turnout and immense support accorded him. He said even though the ceremonies were rigorous he was able to emerge safe and that he was now skilled and determined enough to forge ahead with the affairs of the chiefdom.

He used the occasion to praise all those that have contributed in actualising his dreams with special thanks and appreciation to his colleague paramount chiefs, the youths, the drivers and the Okada riders for their untiring efforts.

The Paramount Chief zeroed down with an appeal to his subjects to remain law abiding and to complement the efforts of each other for the development of Kaffu Bullom chiefdom and the country as a whole.

President Koroma has done it again...