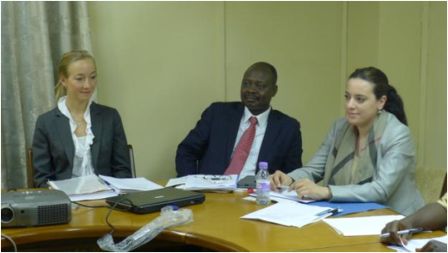 In a bid to finalize the concept of the Sierra Leone Integrated Nuclear Security Support Plan, the International Atomic Energy Agency(IAEA) through the Nuclear Safety and Radiation Protection Authority in the Ministry of Energy started a two day seminar to establish an Integrated Nuclear Security Support Plan for Sierra Leone.  The three man delegation from the IAEA Austria led by Sarah Bilson is in the country to achieve this objective.  (Photo: Sarah Bilson, Zephirin Ouedraogo, Heba Negm)

Delivering a statement, the chairman, Nuclear Safety and Radiation Protection Board, Prof. A B Karim, said that the Nuclear Safety and Radiation Protection Act 2012 gave additional mandate to the authority. He noted that one of these mandates is to monitor non-Ionizing radiation. He noted that concerns have been raised by the populace on the proliferation of mobile towers in the country. He further revealed that the Authority will soon start monitoring food and other consumables and also establish a regional office in Makeni.

Declaring the seminar open, the deputy minister in the ministry of Energy, Hon. Martin Bash Kamara said the commonly held view that nuclear security is mainly for member states and not a global challenge is erroneous and misleading. He stated that a nuclear terrorism incident in any country will have widespread consequences for geopolitical and global economy.

Hon. Bash Kamara, further maintained that there is every need for regular dialogue among stakeholders in promoting nuclear security.  He stated that government institutions and the nuclear industry should work together in the process of limiting risk, setting expectations and communication with the media and the public on nuclear issues. The delegation is made up of Sarah Bilson, Heba Negm and Zephirin Ouedraogo.