Internal Affairs Minister on transit to anti-drug meeting in Abidjan 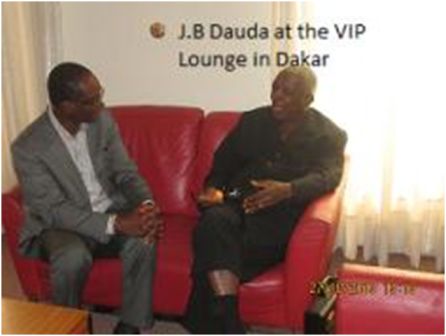 Internal Affairs Minister on transit to anti-drug meeting in Abidjan

The Minister of Internal Affairs  Joseph. B.  Dauda yesterday touched down in Dakar Senegal on transit to a  two day meeting in Cote d’ivoire  to attend the West Africa Coast Initiative (WACI) meeting .

The project meeting according to the Minister is to ensure and in particularly discuss and map out strong measures and strategies to stop drug Trafficking and Transnational Organized Crimes like Human Trafficking and Money Laundering.

The meeting he said is in collaboration with the United Nations Office of which four pilot countries – Sierra Leone, Guinea, Cote d’ ivoire and Liberia have been chosen. “The UN and the relevant authorities of these four pilot countries will set up a security out fit to counter all of these vices and also during the two day meeting will discuss and find out ways of funding these Institutions, as few are not supported from their national budget” Minister Dauda explained.

Day two of the meeting according to the agenda will see further discussions with regards stronger methods and strategies to be put in place in order to deter such trafficking and the signing of the relevant documents.

The Minister was accompanied by Police Superintendant Lappia.