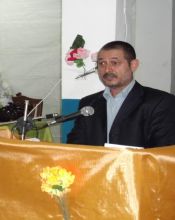 The Iran Cultural Centre has on Wednesday, October 23 this year, celebrated Ghadir Khum or the election of Imam Alie (peace be on him) as successor to Prophet Mohamed (the peace and blessings of Allah be on him) after his death in the Arabic calendar which was the 18th of Dhul Hijjah.

The event which saw the full participation of the Iranian Ambassador to Sierra Leone, Alhaji Bakhtiari, the Cultural Consul of Iran to Sierra Leone, Mr. Mohamed Reza Ghezel Sofla, Chief Imams, Imams, students of the Imam Khomeini Relief Foundation and members of the public, was staged  at the Cultural Centre at 25 Garrison Street in Freetown.

Addressing participants, Mr. Mohamed Reza Ghezel Sofla, maintained that the day was observed to remind the world about people who have lived very close to Prophet Mohamed and have done their best in serving him and the entire world.

He stated that Almighty Allah commanded the Holy Prophet to convey to his people the message he was supposed to carry before his death or else all his twenty three years of service which he rendered as a Prophet would go in vain.

He explained that this verse came to the Prophet after his last pilgrimage [Hijra] and it was not about jihad, fasting, prayer or pilgrimage but about leadership.

He intimated that any nation without good leadership  is an evil nation, noting that God told the Prophet that, ‘’I will protect you against people who may develop ill feelings when you tell them about the ethics of good leadership. Therefore convey the truth to your people.”

He maintained that a nation can be objective if it has good leadership. He told the people that it is the duty of Imam to lead the people in religious affairs.

He disclosed that the name of the day was derived from place where the Prophet assembled over one hundred thousand people under the hot burning sun when at a junction which is referred to as Gadir Khum and said to them, ‘’I am above you all, not so?” The people, he further explained, then responded in the affirmative. He said he then told that he will leave with them the two most important belongings, which were the Book of Allah, the Holy Quran, and his progeny, that is the Ahlul Bayt, that is the Household of the Prophet, and that he told them that the two shall never separate from each other until they come to him by the pool of Paradise.

He lectured that the Prophet then stood up and raised the hands of Imam Ali and announced that, after his death Ali should be the next Imam and his successor.

Media has to play a very different...