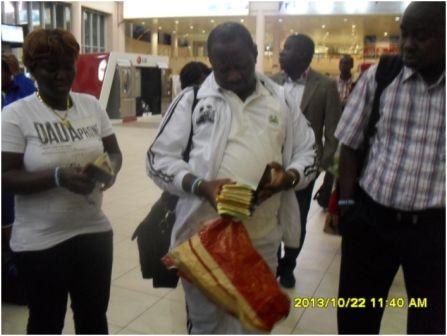 The Sierra Leone Female Under 20 squad have arrived in the Nigerian Administrative capital, Abuja on Thursday morning on board the MED Airlines after a night stop in the business capital, Lagos. The Sierra Starlets will be playing the Falconets of Nigeria in the 2014 Women’s Under – 20 World Cup qualifiers on Saturday October 26 at 1:30 PM local time with the return leg due two weeks later.

The 25-man delegation arrived at the Murtala Muhammad Airport onboard the ARIK Airlines from Freetown on Wednesday night where they were promptly received by the Nigeria Football Association representatives.

They were taken to the Silver Grandeur Hotel in Lagos and in the early hours of Thursday morning boarded the MED Airlines for the one hour flight to Abuja and subsequently taken to the Chida International Hotel in Abuja, which is a 30 minutes drive from the airport.

Leader of the 25-man contingent, Mohamed Sorie Jalloh, who is also the Tonkolili District Football Association Chairman said they were impressed with the prompt reception by the Nigerian FA on their arrival in Lagos noting that so far everything is okay.

On her part, the Sierra Leone Female Under 20 Head Coach, Hannah Williams expressed optimism that they would come out of the match with raised heads. She explained that team spirit is high and that the players are highly concentrating on the match against their Nigerian counterparts – the Falconets of Nigeria.

However, it should be noted that if the Sierra Starlets can make it through against the Nigerians, they would qualify for the World Cup in Canada.

By Hawa Dauda in Abuja

IMF executive board approves US$95...

We are not going to let the Falconets ha...