Poverty Decreased by more than 10 Percent! 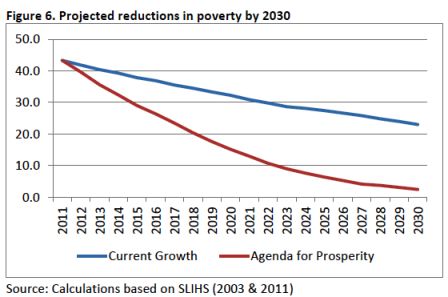 Poverty Decreased by more than 10 Percent!

The Sierra Leone Statistics bureau has launched “A Poverty Profile for Sierra Leone” report at the Ministry of Finance and Economic Development. The report was derived from the Sierra Leone Integrated Household Surveys (SLIHS) of 2003 and 2011 conducted largely by the country’s statistics authority but the analysis were done with technical assistance from the World Bank and the report was jointly presented.

The key finding of the report is that “nationally, poverty has decreased from 66.4 to 52.9 percent between 2003 and 2011 – a reduction of more than 10 percent”. Generally, the report spawned up several other paradoxes; it says: “strong growth in rural areas, yet rural poverty is still higher than urban poverty” although there is a poverty increase Freetown. This is not surprising given the influx of poor people into the city. But on inequality, the indicators are quite intriguing; “overall from 2003 to 2011, national inequality levels have decreased yet 20 percent of the population controls about 50 percent of the economy”! Also, “gender parity in education has been achieved for younger children, but girls’ enrollment rates fall off sharply when women enter childbearing years”. The report also confirms views universally held about education: “households with lower levels of education of the head were more likely to be poor.

Then, there is a staggering indicator on illiteracy: “In 2011, 56 percent of adults over the age of 15 had never attended formal school”! Juxtaposing this gloomy statistic on the level of illiteracy among our youth with the established correlation of low levels of education and poverty, it becomes even more glaring the challenges Sierra Leone faces in the fight against poverty.

Education is not the only sector in the gallows; in fact agriculture is right under the guillotine. It remains the dominant livelihood throughout the Sierra Leone.  In 52.4 percent of households, the head listed agriculture as their main occupation. In rural areas, this percentage was 78.3 percent. The report says “households in which agriculture is the primary occupation of the household head are poorer than other occupations. The story is not entire dark though; “the poverty headcount for agricultural households showed an 18.5 percent decrease from 74.6 in 2003 to 60.8 in 2011. This growth could be attributed to the Small Holders Commercialization Programme and other initiatives in the agricultural sector in recent years.

The poverty figures on gender parity make a bruising indictment of the Sierra Leone’s patriarchal society: “in urban areas, male and female headed households are equally likely to be poor, but in rural areas, female headed households are less likely to be poor”, so much for the rural men! But this is not entirely bemusing, Sierra Leonean women tend to be more enterprising; they engage in petty trading, subsistent farming or some other form of economic activity just to put food on the table and to take care of the needs of the children. Overall, poverty has decreased “but more than half of the population is still below the poverty line”. However, “if government were to eradicate poverty through a cash transfer, le, 41,147.1 on average is required for each poor person”!

In his opening remarks, the Development Secretary, Mr. Ishmaila Koroma who chaired the event said, the report could not have been more timely. He indicated that even though the Agenda for Prosperity (A4P) is in its last stage before its launch in the coming month, it could still benefit from the insights provided in the report. The Development Secretary commended the World Bank for providing technical assistance which has contributed to enhance the credibility of the report.

The World Bank Country Manager, Mr. Francis Ato-Brown expressed satisfaction that the country has made some progress in reducing poverty which is in consonance with the overall World Bank Poverty eradication mandate. He entreated especially civil society and the media to cast their minds wide in their analysis of the report and provide the necessary rejoinders to the development agenda of the country. Ato-Brown reiterated the World Bank’s continued support to Sierra Leone’s poverty reduction program.

Both 2003 and 2011 surveys have several interesting pillars covering the various sectors said Statistician General, Mr. Abdul King-Koroma. He explained that the World Bank and the African Development Bank for instance, identified the poverty and unemployment pillars to generate the poverty profile and the unemployment reports respectively. Mr. Koroma expressed his institution’s desire to collaborate with other development partners to do similar analysis in other areas.

The Minister of Finance and Economic Development, Dr. Kaifala Marah was as moderate and poignant in his reaction as the report was hale and mortifying. Asserting that the 2011 survey was 100 percent funded by the Government of Sierra Leone the Minister said the report has given a heads up pointing to some gains and shedding light on some challenges for government, its development partners but also civil society and the media. Dr, Marah re-echoed the Development Secretary’s remark about the relevance of the report to the Agenda for Prosperity and noted that already; some of the key issues have been included in the document. He expressed government’s appreciation to the World Bank which he described as a dependable partner in the country’s development agenda.

Clearly, there are several highs and lows in the report underpinning Sierra Leone’s complex poverty and development dynamics. Already serious initial debate has begun during the questions and answers session of the launch. In fact, the Financial Secretary, Mr. Edmond Koroma, referring to rural poverty, expressed disappointment with the local councils ‘considering the huge resources transfer through decentralized service delivery program”. He suggested that a similar launch should be done at local level to get them to answer to some of the issues presented in the report.

Whatever, the arguments, the report states that if growth remains at the “same pace as seen between 2003 and 2011, poverty will be 23% in 2030” which coincides with country’s target for achieving middle income status. To meet AfP goals, per capita growth needs to increase from 1.2 to 4.8% annually, which means overall GDP must grow around 9% and growth must remain “pro-poor.”

As ACC intensifies the fight: Just...