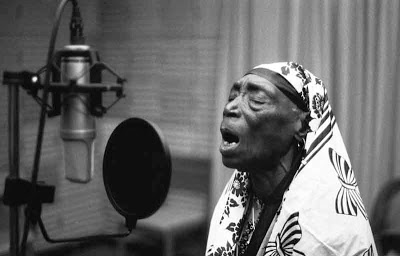 Fatuma binti Baraka (aka Bi Kidude), Zanzibari Taarab singer passed away on 17th April 2013.  She was considered the undisputed queen of Taarab and Unyago and was also a protégé of Siti binti Saad.  Bi Kidude was born in the village of Mfagimaringo, she was the daughter of a coconut seller in colonial Zanzibar.  Bi Kidude’s exact date of birth is unknown, much of her life story is uncorroborated, giving her an almost mythical status.

In 2005 Bi Kidude received the prestigious WOMEX award for her outstanding contribution to music and culture in Zanzibar.

As a child, she was singled out for her fine voice and, in the 1920s, sang locally with popular cultural troupes, combining an understanding of music with an equally important initiation into traditional medicine.

At age 13, after a forced marriage she fled Zanzibar to mainland Tanzania. Bi Kidude toured mainland East Africa with a taarab ensemble, visiting the major coastal towns and inland as far west as Lake Victoria and Tanganyika. She walked the length and the breadth of the country barefoot in the early 1930s fleeing another unhappy marriage.

In the 1930s she ended up in Dar es Salaam where she sang with Egyptian Taarab group for many years.

In the 1940s she returned to Zanzibar where she acquired a small mud hut to be her home. She is known for her role in the Unyago movement which prepares young Swahili women for their transition through puberty.  She is one of the experts of this ancient ritual, performed only to teenage girls, which uses traditional rhythms to teach women to pleasure their husbands, while lecturing against the dangers of sexual abuse and oppression.

Let There Be Light: But at What Pr...