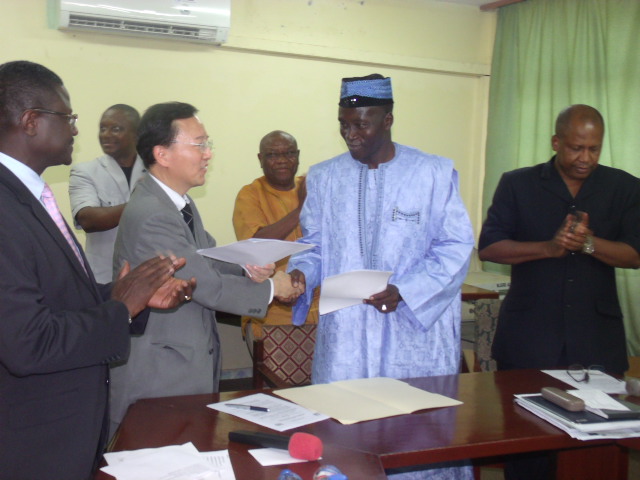 Signing the declaration on behalf of GOSL, the Minister of Trade and Industry, Honorable Usman Boie Kamara, expressed hope that Dr. Kandeh Yumkella’s work will be a lasting legacy for Sierra Leone. He noted that UNIDO has been contributing immensely to the industrial development of this country and commended the organization for promoting self sufficiency in the country.

The minister pointed out that the impact of UNIDO’s developmental activities is felt right round the country where it has been supporting Growth Centres.

Honorable Usman Boie Kamara gave special thanks to UNIDO for funding the construction of the biggest Growth Centre building in Sierra Leone built in Bo City, disclosing that the president himself, His Excellency Dr. Ernest Bai Koroma has consented to unveil the structure on April 12, 2013.

Usman Boie Kamara described UNIDO as a major component in reducing poverty and increasing wealth in developing countries. Many countries, he said, owe the success of their industrialization to UNIDO.

In the declaration, GOSL and UNIDO declared their intention to work closely to develop a Country Programme with the objective of contributing to the achievement of the goals and targets of the government’s ‘Agenda for Prosperity’ for 2013-2017.

Both parties also declared their intention to field a UNIDO mission to Sierra Leone in April 2013 to initiate the formulation of a Country Programme that will focus on Agribusiness Development, Renewable Energy, and Small and Medium-sized Enterprises, with particular emphasis on youth employment and gender; Industrial Statistics and Technological Support, with issues of quality and standards cutting across all the three domains, and additional areas that may subsequently be approved by the Dr. Kandeh Yunkella, Director-General of UNIDO and Sierra Leone’s Trade and Industry Minister.

GOSL and UNIDO in the declaration registered their desire to have the Country Programme finalized for signature during the Vienna Energy Forum scheduled to take place in May 2013. They further expressed their desire to embark on joint fund mobilization efforts to marshal necessary resources for the effective implementation of the Country Programme.

GOSL and UNIDO finally expressed their intention to review the progress achieved in cooperation between them after a period of one year after the signing of the Joint Declaration, and to decide then any further measures that may be desirable to enhance that cooperation.