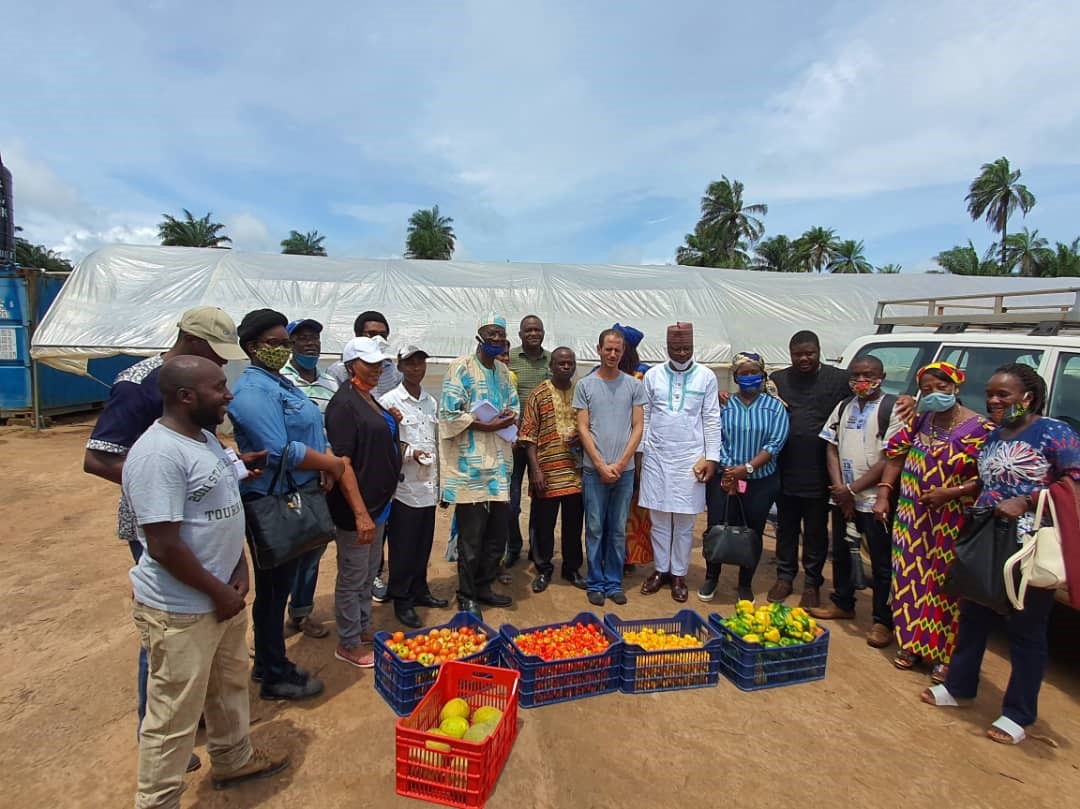 As Fresh Vegetable set for Exportation, the Ministry of Trade and Industry (MTI) in collaboration with the Ministry of Agriculture& Forestry (MAF) have on Friday 24th July 2020 assured FRESH SALONE on government’s continuous support to protect and promote vegetable production and exportation to European countries through the Sierra Leone Import and Export Promotion Agency (SLIEPA).

This proclamation was made public by the Deputy Minister of Trade and Industry, Rev.Abraham James Sesay Jones during an exhibition visit on FRESH SALONE vegetable farm at Kobbaya Village Kaffu Bullom Chiefdom in Port Loko District Northern Sierra Leone while the head office is situated at 30 Chamber Drive, Ogoo Farm in Freetown.

In his opening remarks as Chairman of the meeting, the District Agriculture Officer, Port Loko District, MAF, Charles A.Bangura told the gathering that FRESH SALONE is primarily dealing with vegetable production in Sierra Leone with standard packaging that suit international best practice, noting that FRESH SALONE limited is a private and profit making company for exportation of fresh vegetables.

He commended the Managing Director, Jonathan Rosenfeld for initiating FRESH SALONE farm at Kobbaya village with the involvement of the Sierra Leone Airport Authority in a bid to increase vegetable production and promote foreign investment.

In his key note address, the Deputy Minister of Trade & Industry, Rev.Abraham James Sesay Jones, expressed profound gratitude to Fresh Salone, especially the Director, Mr. Jonathan Rosenfeld and Kaffu Bullom stakeholders for their supportive role throughout the entire process, noting that FRESH SALONE will continue to receive government’s support at all time.

Rev.Abraham Jones said MTI is willing to support Mr. Jonathan and any other international or local investor who may want to engage in such fruitful production, adding that President Julius Maada Bio is also committed and ready to invest in farming activities across the country.

He said the action of FRESH SALONE has inspired his Ministry and other individuals present to move from the city to embark on farming activities because according to him, the country is blessed with fertile soil for agricultural purposes.

In his quick submission, the Managing Director of FRESH SALONE limited, Jonathan Rosenfeld emphasized on the important of partnering with MTI, MAF and SLIEPA to promote vegetable production, adding that FRESH SALONE was legally registered in Sierra Leone in 2018.

Mr .Jonathan Rosenfeld said his vision was to cultivate quality and standard vegetable products that will meet international best practice, especially to the European Market and Africa as well, citing that his company had previously exported groundnut, mango, ginger, and leaves among other farm products.

He continued that women farmer groups usually supply his company with fresh leafy vegetables for weekly fresh exports and monthly frozen export by containers, adding that the essence of the event was to celebrate the achievement of the newly established Federation of Agricultural Produce and Exporters Sierra Lone (FAPE SL).

He commended government through MTI, MAF, and other Ministries, Departments and Agencies for their supportive role they have been given to FRESH SALONE during the initial stage to date, while he also commended community stakeholders.

He assured Kafu Bullom Chiefdom and the entire country as a whole that FRESH SALONE will continue to provide jobs for young Sierra Leoneans including women and men who are engaged in farming activities.

Delivering statement on behalf of SLIEPA, the Chief Executive Officer (CEO), Sheku Lexmond Koroma said export and import protocols usually reduced economic burden of a nation through various channels, adding that the investment of FRESH Salone will be protected accordingly in accordance with the laws of the country so that the people will felt the transformative drive and the same investors will promote the image of the country internationally.

Mr .Sheku L.Koroma said Mr. Jonathan was very mindful of COVID 19 invention and that is why he is now planned to engage more women Agriculturists in Sierra Leone to create employment opportunities and increase job creation.

The SLIEPA Boss noted that, recently Sierra Leone was able to export over ten thousand tons of vegetable products to the European market which in turns had provided huge foreign currencies and had also stimulate the economic status of the country amid the easing of restriction of covid 19 pandemic.

He maintained that even though the country is battling with COVID 19 pandemic, yet still he assured Mr .Jonathan of SLIEPA continuous support to the process so that the country will achieved it desire goal in the area of protecting all investments whether local or international.

He recalled recently on how other countries in Africa including Rwanda, Congo and others have been ban in the European market for producing substandard products whilst Sierra Leone flag is flying higher in terms of fresh vegetable products.

“We need to commend government and the management of FRESH SALONE for being the brain behind these investments. I am so overwhelmed to witness such good historic event where products from Sierra Leone were taken to the European market for export sake with the inscription made in Sierra Leone”, SLIEPA CEO lamented and expressed happiness to community stakeholders for their kind support in promoting the local content policy.

“Our regards and respect to the paramount chief including all other section chiefs at Kaffu Bullom ,Headman of Kobbaya Village ,Mr. Mohamed Tarawallie and other surrounding village authorities for the relentless support they have been given to Mr. Jonathan”,Mr. Sheku Lexmond Koroma divulged.

Speaking on behalf of Sierra Leone Women Farmers Forum (SLWFF),the national President ,Madam Oya Kargbo said they are very much satisfied with Fresh Salone ,adding that they as female farmers were very determined to pioneer the vegetable cultivations with Mr. Jonathan and whosoever want to invest in that direction or otherwise.

Oya Kargbo expressed gratitude to government through the various line Ministries, Departments and Agencies for bringing more opportunities in the farming sector but highlighted several challenges that are affecting their operations ranging from sourcing funds, farming equipment and standard fertilizers.

In his security backing up message on behalf of the Local Unit Commander, Lungi Police Division, the Support Officer, ASP Victor Kargbo assured the gathering and the entire Kaffu Bullom residents that their primary mandate is to protect lives and properties.

Giving the vote of thanks, FRESH SALONE, Agronomist, Sylvester K.Kalda expressed appreciation to government officials and all other participants for leaving their busy scheduled to witness the occasion.

SLP & RSLAF Atrocities Under B...