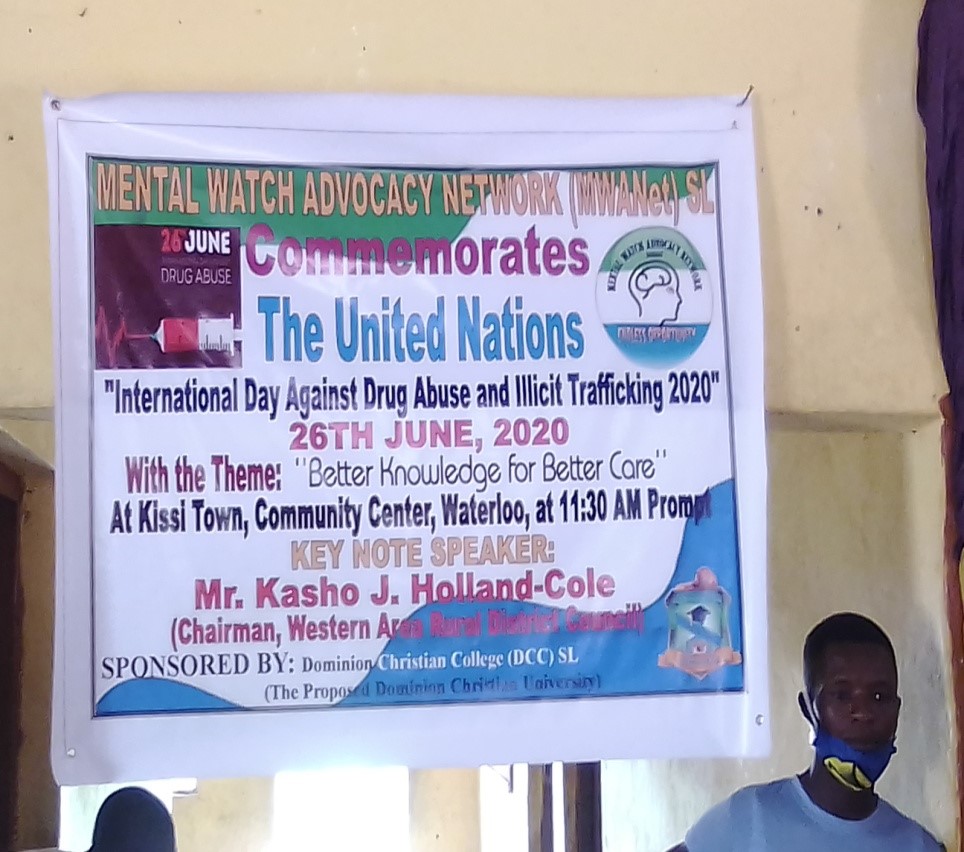 The historic engagement was held at the Kissi Town Community Centre via Camp Junction in Waterloo in the presence of several youth groups and community stakeholders including other Civil Activists and WARD C Representatives.

In his opening remarks, the Chairman of the occasion, Dr.Ezekiel H.S.Bangura, who happens to be the Chief Adviser, MWANet –SL, told participants to marks up before he could start his moderation task as a way to recognize government’s health directives in a bid to eliminate the dreadful covid 19 pandemic.

He encouraged young people to emulate good examples in society and tried very hard to always stay away from harmful drugs which could damage their good health status and also destroy their potential due to lack of education as the theme for this year highlighted.

In his keynote address, the Deputy Chairman, WARD C, Mr. Robert Brown, who also served as the seating Councilor for ward 387, fonima community, Goderich, said he is representing his boss, Kashor Holland J.Cole, who he said was unavoidably absent due to other similar official tasks or duties gear towards repositioning young people across the district through the reestablishment of the District Youth Commission.

The Vice Chairman noted that drug abuse and illicit trafficking had being a huge challenge in the entire district and even beyond but they are currently on the verged of addressing such menace with the establishment and creation of various skills training centers in strategic locations to transform drug users and other vulnerable youths.

The WARD C representative also disclosed that they have early secure a long project from the World Bank to repositioned young people in youth empowerments and capacity building.

On illicit drug substance and alcohol policy, Mr. Brown assured participants that they will do all what they could to make sure that they review several policies and regulations, especially with regards to the hash alcohol content and other danger substance.

He commended MWANet SL for initiating such programmes so that youths in the district and even beyond will stop miss using drugs and adopt decent life style for self-reliance in the future.

“An idle brain is the devil workshop. We would continued to partner with various youth groups through the District Youth Commission”, Deputy Chairman divulged.

He concluded by calling on all Sierra Leoneans to come onboard and support council into their strategic plans ,while he also assured young people of council’s continuous support to provide vocational skills training and other civic education.

In his statement, the Founder & Chief Executive Officer, MWANet SL, Ibrahim H.Koroma expressed appreciation to all those present for leaving their busy scheduled just to grace the occasion, noting that without their support he would have not reach this level.

Mr .Progress man stated that his organization was officially registered as a CBO through the Western Area Rural District Council and also from the Ministry of Social Welfare including other key line Ministries, Departments and, Agencies .He added that MWANet SL has a legal bank account at the Sierra Leone Commercial Bank (SLCB) with full documentation. He said because they can’t cover all the issues at the same time that is why they have decided to identify key thematic areas like, mental health that has to do with mental illness, alcohol, drugs and other substance abuse.

He continued that, MWANet SL is a Socioeconomic health community based micro level implementing organization focused on advocacy ,human rights to champion right opportunities and services of vulnerable children/adults especially those at risk complications with mental and public health issues through micro intervention ,strategies and advocacy network with competent team of volunteers.

Mr .Koroma noted that this whole thing was started in college when he was preparing for his final dissertation on Mental Health, adding that the passion to help others was his main motive of forming MWANet SL as a form of giving back to society.

“This is a moment to address the problems of decades which we inherited from our forefathers. This is a time to be radical and bold in addressing drug abuse and illicit trafficking across the country. We are commemorating this day for youths to understand that this came as resolution 42 of the 1112 general assembly long ago due to an incident which took place in China and it was recognized by UN on every year ,June 26.”, said Progress Man.

The Founder & CEO went furthered to describe drug abuse and illicit trafficking as a global problem that poses a great danger to the lives of individuals, security, and the state as a whole.

He said the day was put aside mainly to raise awareness on the danger of drug abuse and illicit trafficking. He assured the gathering that his organization will work in the interest of the people not for selfishness like other sister CBOs.

He said they are also focusing on technical areas like child protection, drug abuse and illicit trafficking; noting that other aspect of the technical area is based on research and public policy which he said they have also intended to engage Parliamentarians with regards the review and amendment of some of the policies.

Mr .Koroma lamented furthered that they will continued to facilitate skills training for drug users, homeless victim and other vulnerable citizens across the country if God be there helper ,adding that their target beneficiaries includes ,drug users ,homeless people ,commercial sex workers ,TB & HIV/AIDs  patients.

He concluded by calling on government and its donor partners to support MWANet SL so that they can deliver to the expectation of the people and transforms the lives of many vulnerable victims across Sierra Leone and beyond.

Mr .Renner noted that the agency was established since 2009 through an act of parliament to reduce the rampant misuse of drugs in the country and that since the inception of the agency, they have being able to address many issues through continuous community engagement with the affected victims.

Speaking on behalf of the Community Relations Department (CRD) of the Waterloo Police Division, the Head of CRB, Inspector Jeneba Shyllon expressed happiness to MWANet SL for complementing government’s effort in combating drug abuse and illicit trafficking prior to this commemoration.

Madam Jeneba assured the gathering that they are ready to continue enforcing the law so that youths will refrain from taking harmful drugs which could damage their future ,adding that they are only calling on all authorities to support them in the process.

On his own side, the Executive Board Chairman for the Local Policing Partnership Board (LPPB), WARD C, Mr .Mohamed Orpeh Koroma expressed appreciation to MWANet SL for joining the rest of the world in commemorating the UN International Day Against Drug Abuse and Illicit Trafficking.

However ,the drug users and other commercial sex workers representing the Hardest Team ,ABH ,FFB and Team dup assured the gathering that based on what they have learnt during the commemoration ,they will never misuse drug and alcohol in their life, whilst the Communication & Advocacy Officer ,Mr.Septimus Sandy and other people also made meaningful contribution to mark the day proper.