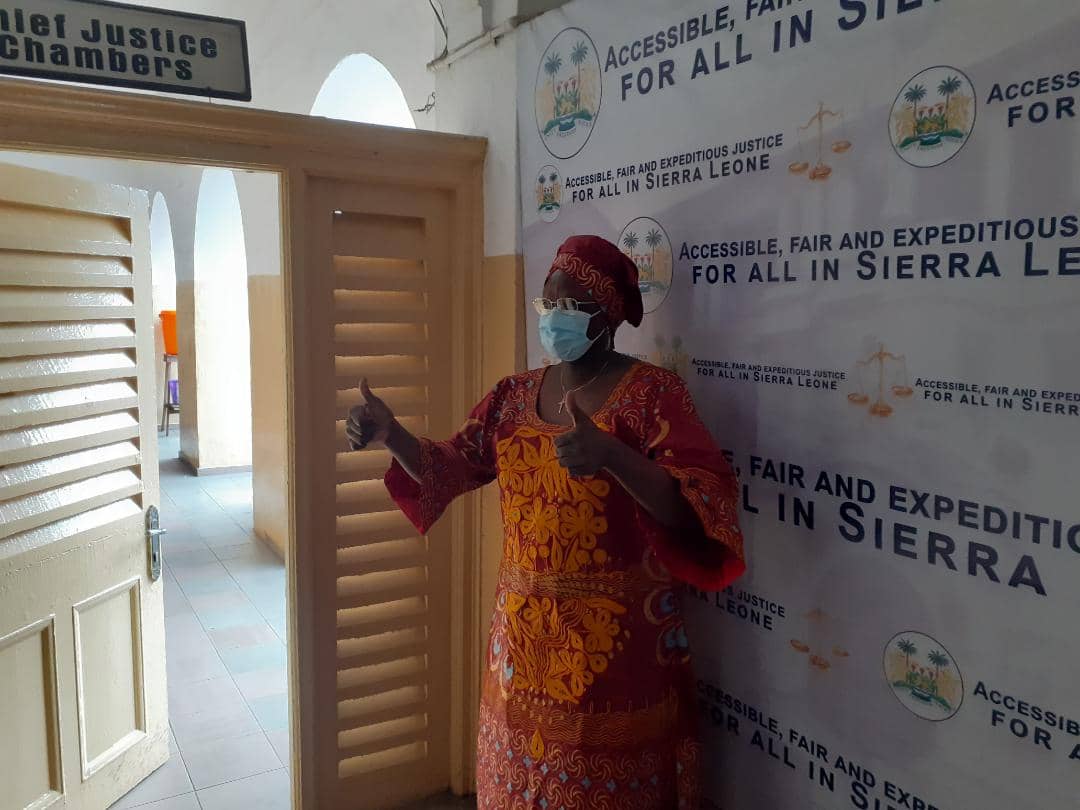 A portrait of the Former President of Sierra Leone Dr. Ernest Bai Koroma, has Tuesday June 30th 2020, been tendered in evidence at the Freetown Magistrate Court No. 1 by the State; in the case of libel brought against one of the country’s former cabinet minister and aspirant for the presidency, Dr. Sylvia Olayinka Blyden.

Led in evidence by the State Counsel from Law Officers Department, the Police Officer in charge of storage of exhibits at the Police CID (aka Exhibit Clerk), tendered a series of items which were said to have been recovered from Dr. Sylvia Blyden’s residence. Most prominent amongst them was a very large-sized picture of the former president, Dr. Ernest Bai Koroma.

It is unclear what the State finds to be criminally offensive about the former president’s picture as the State Counsel, Lawyer Yusif I. Sesay only had the Exhibit Clerk tender the photo without submitting why the picture offends the State.

Former Attorney General and Minister of Justice Hon. Charles Francis Margai who is representing Dr. Blyden did not cross-examine the Exhibit Clerk witness but he objected to the tendering of the picture and the other items on several grounds. All the grounds of objection were however over-ruled by the presiding magistrate, Hannah Bonnie who gave the go-ahead for the picture of the former president and other items to be tendered in to evidence.

The Exhibit Clerk was the Second Prosecution Witness. The first Prosecution Witness, Police Superintendent M.K. Alieu was robustly cross-examined by Lawyer Margai before he was stood down for a possible recall of his cross-examination. Lawyer Margai pointed out that the Search Warrants which the witness said he executed at the residence of the former minister, placed limitations on what the Police could do at the house.

The Witness, under the skilled cross-examination of the former Attorney-General Charles Margai, confessed that although the Search Warrants only authorized the Police to take away items containing subversive materials, at the time they took the laptops and mobile phones, the police had no evidence of anything subversive in them. Lawyer Margai also got the Witness to confess that after they took the laptops and phones, the police proceeded to “examine them in the absence of Dr. Blyden”.

The Witness has already confessed to the court that even though Dr. Blyden requested that she should be present when they are examining her laptops and the phones, the Police deliberately chose to open the laptops and phones and tamper with them in the absence of Dr. Sylvia Blyden.

Lawyer Charles Margai also asked several sharp questions around the circumstances of the arrest and 22 days detention of Dr. Sylvia Blyden. He got the Police Witness to confess that there was no Arrest Warrant ever issued for the arrest of Dr. Blyden. As the police witness, M.K. Alieu initially tried to evade the question, he was professionally handled by Lawyer Charles Margai to the delight of the entire courtroom. The police witness eventually confessed that “there was never any Arrest Warrant to effect the arrest of Dr. Sylvia Blyden”.

Lawyer Charles Margai also got the police to confess that the circumstances of the arrest were cloudy to which the police witness said that he used his “discretion” to arrest the former minister and detain her for 22 days without charging her to court.

The matter has now been adjourned for two weeks until Monday July 13th 2020.

There is another different court case brought by the State against Dr. Sylvia Blyden up at the High Court but there is a very strict court order that the details of that different High Court case should never be openly discussed in public so this writer cannot discuss that court case out of respect for the Orders of the High Court. However, Magistrate Hannah Bonnie, presiding over the magistrate court case, at the previous hearing of the Libel Case against her in front of her on June 24th 2020, openly discussed the High Court matter. It is unclear what happens when a member of the Judiciary disobeys an Order of the Judiciary. That second Court matter by the State against Dr. Sylvia Blyden comes up on July 1st 2020 at the High Court.

In the first matter, the government of Sierra Leone President, Julius Maada Bio charged Blyden on seven counts of alleged criminal libel against both Bio and Bio’s regime – during which libel case, the picture of the former president, Ernest Bai Koroma, allegedly found hanging on a wall in Sylvia Blyden’s house, has now been tendered as one of the offensive evidence of whatever is the case of the Bio-led government against Dr. Sylvia Olayinka Blyden.