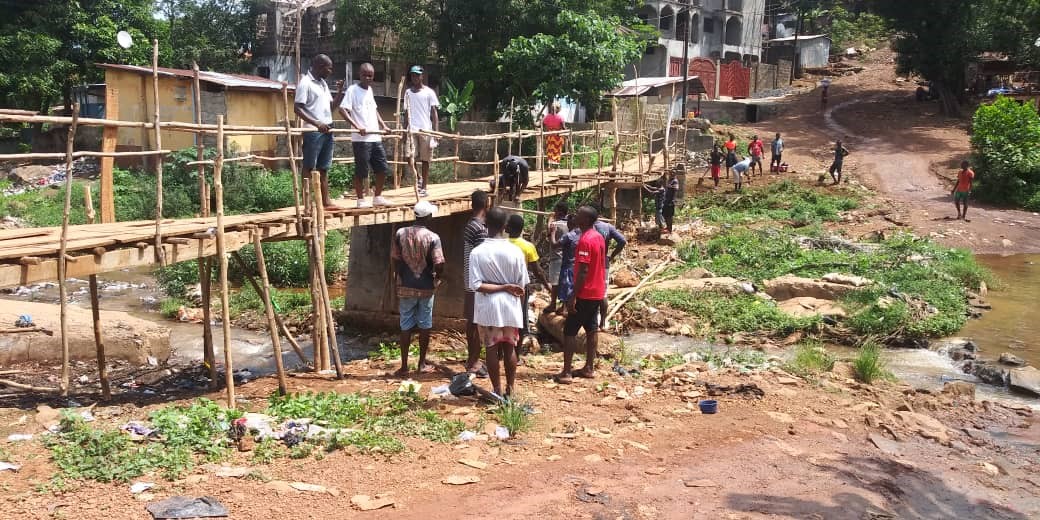 Kaningo community is one of the most undeveloped, deprived and neglected communities in the West of Freetown.

On the 14th of August 2017, this community was badly affected by the mudslide, landslide and flooding which led to the total collapse of the one and only bridge that the community was boasting of.

This bridge is the most important bridge linking several communities to the Kaningo community. Children, youths and the aged use this aforesaid bridge to access their deferent schools, colleges, work places and so on and so forth.

When the bridge collapsed on the 14th August, 2017 some community stakeholders came together and constructed a temporal wooden bridge.

Daniel Fonah, a resident at Kaninago revealed  that  the temporal wooden bridge has taken almost three years since it was constructed and that it has loosed its strength and firmness and that since it has started raining, stakeholders have started raising concern that the temporal wooden bridge is becoming a dead trap but for the timely intervention and blessing of a businessman called  Mamoud Nice Guy Kamara  who came to their rescue to reconstruct the wooden bridge to a brand new one.

He said during the past rainy seasons, children hardly went to school because parents could not to afford to pay the expensive motorbike fares for their children to attend classes.

Mrs. Kadiatu Koroma said that Kaningo is a deprived community that depends on the bridge linking Lumley community underscoring that without the bridge it is difficult for  their children to go to school and that the alternative route through Juba Hill is more expensive between Le 10,000 – Le15,000 for students to access school.

She further disclosed that over the years, government authorities have been coming and promising that they will construct this bridge but to no avail and commended Mamoud Nice Guy for the wonderful effort to intervene and reconstruct the bridge that would facilitate their movements.

He is using his own money to ensure that the bridge is reconstructed.

Mr. Joseph Lahai, a community elder, said they are now happy that the bridge has been reconstructed giving them access to Lumley and other communities.

He commended Mr. Mamoud for the invaluable gesture citing his recent support to the fight against the COVID 19 to the community.