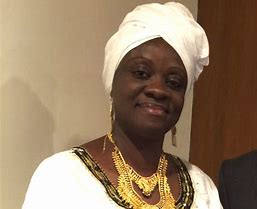 It has come to the notice of Dr. Sylvia Olayinka Blyden OOR, currently held in unconstitutional, malicious custody by President Julius Maada Bio’s government, that Pro-Bio elements in the media have been reproducing a false report authored by Abdul M. Fatoma of CHRDSL against Dr. Sylvia Blyden. In the false report, Mr. Fatoma, (a known adherent of Dr. Kandeh Yumkella arrest/interrogation during Yumkella’s SLPP days) accused Dr. Blyden of having ordered the arrest/interrogation of Journalists when she worked at State House. The blatantly false report was done by the then Yumkella faction of the SLPP who knew Sylvia Blyden’s presence at State House was an obstacle to the ambitions of Yumkella in particular and the SLPP in general. Despite several cautions to Abdul M. Fatoma to retract his very false allegations for many years now, Mr. Abdul Fatoma, for cheap political reason, has refused to do so. This notice is to now serve as a formal public warning to Mr. Abdul Fatoma to issue an immediate retraction and a full apology to Dr. Sylvia Blyden for his very false report that she had once ordered the arrest of journalists when she worked at State House. This notice is to also serve as a strict caution to all those newspapers and other individuals who have been reproducing or sharing the said maliciously false allegation. Let them all be immediately cautioned that what they are sharing from Mr. Abdul M. Fatoma is extremely untrue and was written by Mr. Abdul M. Fatoma with malicious, pro-SLPP motives of disrepute. The entire claims as issued by Fatoma / CHRDSL have no iota of truth to them. Furthermore, including the name of Dr. Julius Spencer and another name of one Mohamed Jalloh, said to be the Editor of Spencer’s PREMIER NEWSPAPER indicates the extreme nature of Fatima’s malicious motives as neither Spencer nor Premier News were ever reported to the CID by Dr. Blyden.

Many of the media attacks on Blyden were unconscionable and not only gender-based but they were also quite nasty in nature. For example, the Global Times of Sorie Fofana and Sheik Bawoh, published on pages of their newspaper that the main duties of Dr. Sylvia Blyden at State House was to have sex with President Koroma on the furniture inside the President’s office. Another newspaper, the SALONE TIMES, owned by Engineer Andrew Keili (who was then an SLPP man alongside Kandeh Yumkella) was also very nasty in its personal attacks with the Editor, Thomas Dixon, publishing that Dr. Sylvia Blyden was President Ernest Koroma’s “SHREW”. In like manner, the CONCORD TIMES NEWSPAPER also was recruited to attack Dr. Sylvia Blyden. The various attacks ranged from describing her as a prostitute to calling her as extra-marital mistress of the then President. All the publications were completely unprovoked and clearly the work of politicians hiding behind newspapers to demean the social standing of Dr. Sylvia Blyden.

Dr. Sylvia Blyden made personal efforts to have this campaign of calumny against her to end but it was all to no avail. The newspapers continued to run very nasty, sexually-explicit and gender-based personal attacks on her. It was a well – orchestrated campaign to demean the intelligent woman that many now saw as enjoying the fullest confidence of the President. They  also feared her presidential ambitions, ( first stated in the year 1994, and nurtured ever since) meant her presence, so close to President Koroma, put her in a prime position to achieve her ambitions. Dr. Blyden’s detractors saw Sylvia Blyden OOR as possibly “the successor” to Koroma who was now doing his second and final term as President. Thousands of dollars were spent in ensuring Dr. Blyden was demonized. The APC, SLPP and other agents who financed the attacks on Dr. Blyden were very desperate. They were desperate because SYLVIA BLYDEN already had a natural popularity which cuts across the entire country and her presence close to President Koroma at State House enhanced her popularity even more. The extent of the nastiness printed against Dr. Sylvia Blyden by her political detractors was unimaginable. The newspaper archives are all there as evidence of the extreme nature of the defamation by particularly GLOBAL TIMES, CONCORD TIMES, SALONE TIMES and THE SLPP UNITY newspapers. A check of those publications of the year 2013 will completely shock at how nasty the contents were.

Through it all, Dr. Blyden never used her position at State House to have any journalist arrested. The truth, as the records will show, is that Dr. Sylvia Blyden, using her private Cockle Bay residence as her letterhead, wrote to the Independent Media Commission (IMC) and the CID of the Police in jointly- attached letters, drawing their attention to the extreme nature of the sexually graphic language and lewd, nasty allegations published against her. In the letters, she clearly stated that she was complaining in her private capacity as a Sierra Leonean Woman. In the letter, she appealed for their intervention to assist her to caution those specific newspapers and their proprietors. She even went further to insist in writing that given her official position at State House, she did not want any uniformed police officer to visit the newspapers nor did she want any journalist to be arrested. Her letters were very clear that she was being forced to seek the intervention of the IMC and the CID because all her personal efforts had not yielded fruits. Contrary to the LIES of Abdul Fatoma and his CHRDSL, the letter was not written on a State House address letterhead nor with her official title of “SEA to President Koroma “. The letter was written clearly at the top as being from a female citizen in her private capacity seeking protection of her good name. Indeed, just as requested by Dr. Blyden in her written letter, no journalist was arrested. All what happened was plain clothes police officers had gone to the four newspapers to drop letters inviting the proprietors and Editors explain why the constant attacks of sexually-explicit nature on the woman. Many of those invited to the CID for a peaceful intervention ignored the invitations and never went there. Nobody chased them to go report there when they ignored the CID. Those who honored the invitation were never arrested nor were they asked to post BAIL. They were simply advised that the nature of the sexual and gender-based attacks were too extreme against Dr. Sylvia Blyden. Nobody was ordered arrested. Nobody was detained. Nobody was in need of a bail or surety. No policeman in uniform ever went to intimidate any journalist on the orders of Dr. Sylvia Olayinka Blyden. The entire Fatoma/ CHRDSL Report is full of malicious untruths against Dr. Sylvia Blyden. Even the claims that Julius Spencer and /or his editor were detained on orders of Dr. Blyden is 100% FICTION. If the said Editor was detained, then it had nothing to do with Dr. Blyden as she had not even included Spencer or his Premier News Media in her written complaint against sexually pervasive attacks launched at her , as a woman.

Bottom-line, contrary to the LIES of Mr. Abdul M Fatoma and his discredited CHRDSL organization, the TRUTH is that Dr. Sylvia Blyden has never ordered the arrest or detention or interrogation in custody of any journalist.

This Public Notice is the final, final WARNING to Mr. Abdul Fatoma to issue a retraction of his CHRDSL lies against Dr. Sylvia Blyden. Let it also serve as a Notice to all those sharing the wicked, politically motivated LIES of CHRDSL/Fatoma. Enough is now Enough!!!