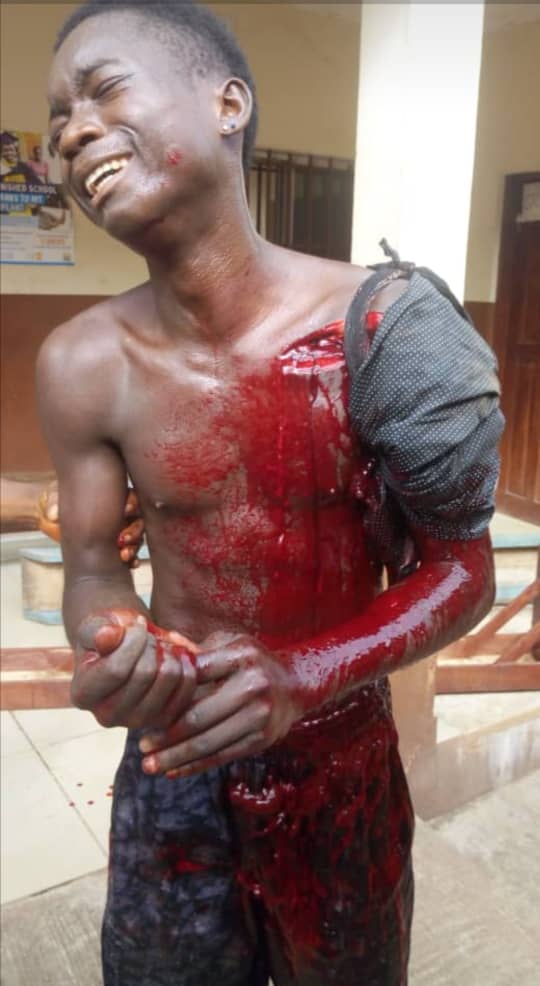 The Lunsar police station, the residence of the Local Unit Commander and the house of the Paramount Chief have all been burned to ground by angry youths following the arrest of a youth leader by police yesterday afternoon.
The youth leader who calls himself Bulgur accuses Paramount Chief, Bai Koblo Queen of usurping development funds which, according to the youth leader, has left Lunsar grossly underdeveloped.

Bulgur sent out audio messages on several WhatsApp groups calling for the dethroning of the Paramount Chief. Police reacted swiftly by arresting Bulgur which triggered the outbreak of violence as an army of youths mobilised to free the detainee.

The police station was attacked with stones forcing the police officers to flee in disarray. Eyewitness accounts say the police station has been set ablaze and several road blocks have been mounted by youths thereby obstructing the free flow of traffic.

Paramount Chief Koblo Queen who has been declared wanted by the youths is said to in hiding.

According commentators who called me from Lunsar, several factors could be attributed to the chaos in the town. Firstly, there is growing hardship and hunger ravaging the township due to unemployment and the massive redundancies that occurred following the closure of the mines.

The devastating effects of the outbreak of the Coronavirus pandemic its excruciating hardship has made an already bad situation worse!

The issue of the Paramount Chief is just the last straw to break the camel’s back!

The prevailing atmosphere in Lunsar is acrimonious as the authorities struggle to maintain law and order.

Youths armed with machetes and sticks and covering their heads with headbands are said to be on the rampage assaulting people at will.

The youths have reportedly imposed a curfew in the township and prohibited business activities for one week.

Army  and police reinforcements are said to be en-route to Lunsar!

Encroachment in to FAWE Land, Mini...