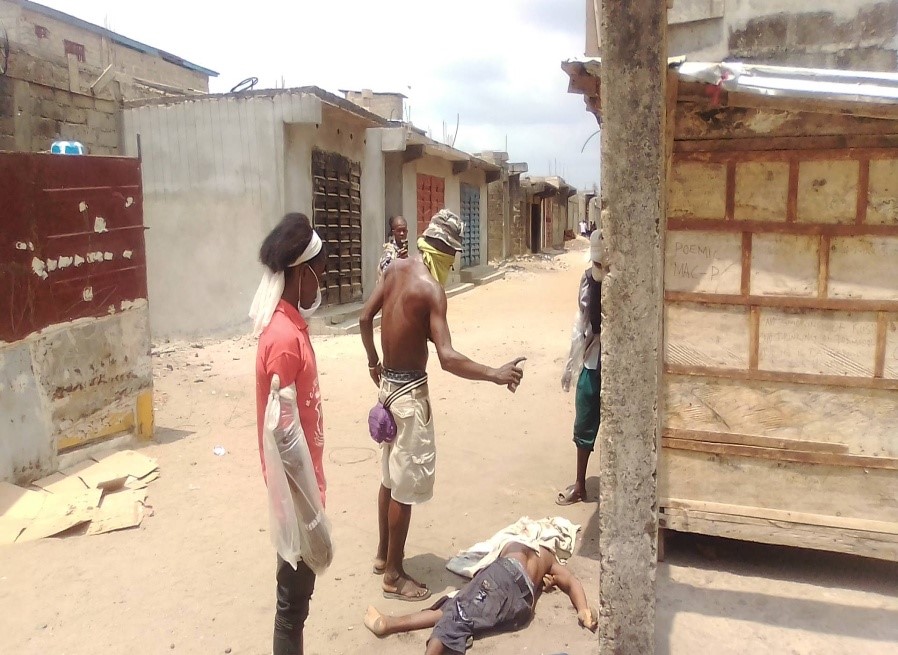 This medium can emphatically reveal that a suspected Tuberculosis (TB) Patient, Umari Jalloh aka “Waterloo Pikin” has died mysteriously at 555 Market, Waterloo on Tuesday 7th April 2020 during the 3 Days Lockdown as a result of poor health status and lack of proper accommodation.

According to some youths in the Market, the said incident took place on Tuesday Night at about 10:30 pm in front of a mini shop and that the deceased held a plastic bag containing few cups of gari which he was chewing without water by his side to drink while he was also coughing continuously at the same time.

In that light, the frightened residents disclosed further that the said suspected Tuberculosis (TB) deceased was abandoned prior to the lockdown at Mabureh town where he initially lived because of his poor health status by his relatives for fear of the Corona Virus; this forced the deceased to move for accommodation.

According to family sources “Umar Jalloh is a petty trader who is believed to have died miserably due to persistent coughing, severe hunger and blood wastage during third day of the lockdown at around 10:30 pm.

The worried youths said since that night they have been trying to contact 117 emergency toll free lines and other necessary contacts for COVID 19 response team but no swift Interventions made to collect the said corpse alongside other corpses across the district.

They added that the suspected TB deceased was initially spotted with a black plastic that contains few cups of Bo Gari at the above mentioned address in front of an unfinished building in half naked but was buried with a burial permit from the Waterloo Government Hospital.

One of the youth who spoke to this medium on condition of anonymity also disclosed that, even though they went for a burial permit at the Waterloo Government Hospital, yet still no protective gears were distributed to them for safe burial practice.

He called on concerned authorities to bear in mind that this is a hazardous period which the national coordinating body, COVID 19 Response Team, headed by the Minister of Defense, Rtd Brigadier Hassan Kellie Conteh must take note of together with the Ministry of Health and Sanitation and lined Ministries, Departments and Agencies.

“We are really disappointed over the way and manner concerned authorities in the COVID 19 fight are ignoring 117 calls and abandoning dead bodies at the same time in Waterloo”, they disclosed and advanced that they are worried for the unsafe burial exercise by community youths with no protective gears.

They therefore called on the attention of Government, WARD C and donor partners to come onboard and institute a robust emergency burial teams so that COVID 19 will not spread at the district due to unsafe burial.

“NLTCP should be supported for TB...