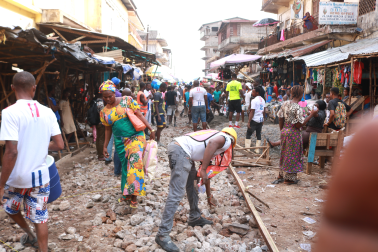 As the Government of Sierra Leone (GOSL) has neglected road construction projects over the years, an organization based at Susans Bay community called Sugar City have galvanized its members to construct Mill Street via Guinea Store, leading from Abacha to Fisher Street in central Freetown.

Speaking to members of the press, former Chairman for Sugar City, Dauda Sankoh, explained that after their last year’s Outing and Beach Fiesta, they decided to use the money they collected to fund the self- help project.

He said Guinea Store road construction is not the first project they have implemented in the community but they have also constructed East Brook and Fisher Streets respectively, noting that Mill Street is the main road which heavy trucks or containers normally used to offload goods.

He stated that they used their physical cash to construct, to buy stones, cement and sand because they are tired of not only the numerous potholes during the raining season but also scaring away of customers from coming to buy or sell businesses. “We will not wait any longer for Government to do this work for us because we have been waiting for far too long now but all to no avail” he stated.

He lauded their Member of Parliament, Honorable Manley Spain for his contribution towards actualizing the project and also recognized the contribution of the CEO for Sugar City.

However, Mr. Sankoh said they have written a letter to the Ward Councilor, Madina Rahman but she is currently under isolation and she could not make it up until she come out of the isolation centre.

He stated that they have people in the Diaspora who are ready to render help but the emergence of the Corona Virus Disease (COVID 19) has reversed all positive plans.

The Chairman advanced that all workers including carpenters and masons are working under volunteerism.

He therefore called on Government, philanthropists and humanitarian organizations to come to their aid to continue with what he described as positive community development initiative.

In her statement, the Chairlady for Susan’s Bay community, Madam Musu Bangura said the project aimed at bringing development to the area which, she further described as been isolated by responsible authorities over the years.

She maintained that they came together to actualize the project for business people to have conducive place to run their businesses smoothly. She said they wanted good Samaritans to come onboard and assist them with materials to fast track the scheme because they cannot do it alone.