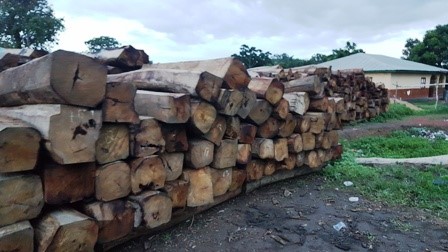 Illicit Timber Trade in Sierra Leone not only has adverse effects on the environment, but it is also reportedly causing an economic burden on the government and people of the West African nation, according to Abdul Karim Dumbuya, Communications Officer of the Conservation Society of Sierra Leone (CSSL). Despite years of laws and restrictions, Dumbuya said added that Sierra Leone’s precious timber is still being exported abroad and unless something is done, the country’s woodlands will have been destroyed within decades.

He said it was clear that some companies and individuals embarking on illicit timber trade do not want to pay tax to the government. This is the reason why they normally use illegal routes in the borders of Sierras Leone to transport their commodities, Dumbuya added.

The impact of tax evasion, according to Abu Bakarr Kamara, Coordinator of Budget Advocacy Network, is that “The huge financial loss accrued in the sector could have been used to finance some government flagship programs like the Free Quality Education and the Free Healthcare for children under five, pregnant women and lactating mothers.”

Meanwhile, the government of Sierra Leone stated in a press release dated 20th February 2020 that a total of US$ 37,050,000 (thirty-seven million and fifty thousand United States Dollars) has been realized from the levies on the legal export of 13,000 containers of timber since the restrictions were temporarily lifted in June 2018.

“Out of this amount, US$4,640,000 (four million, six hundred and forty thousand United States Dollars) has been dedicated to reforestation and US $32,500,000 (thirty-two million, five hundred thousand United States Dollars) transferred to the Consolidated Revenue Fund. The US$32,500,000 has been part of the budgetary resources used to finance Government programs,” the release noted.

What the government referred to as a major success scored on timber trade led to a further announcement of another 7,000-container franchise for export by Leedway Trading Company, the company responsible for the legal exports since 2018, following the exhaustion of the initial 13,000 containers.

The above figures quoted are not, however, equivalent to the major loss realized in the timber trade especially in porous border communities where there is a report of rampant illicit transportation of timber logs to mostly neighboring Guinea for onward shipment to China. US$120 million of economic value is lost annually as a result of illicit timber trade, according to a research done by the Civil Society Movement in Kambia District, Northwest of Sierra Leone.

Recently, seven trucks loaded with timber logs were arrested by the Police following intelligence from local communities that some Guinean registered trailer vehicles loaded full with thousands of pieces of domestic timbers were allegedly en route to neighboring Guinea with the use of fake evidence of tax payment. In February this year, Sierra Leone’s Resident Minister Northwest, Haja Isata Abdulai Kamara, together with some Police and Revenue Authorities at the scene of the crime told this medium that they had discovered some documents tendered by the smugglers for inspection to prove the legitimacy of the exportation deal between Sierra Leone’s Trade Ministry on one hand and a local company, Piltu Clearing and Forwarding Agency on the other and these include an export authorization document issued by the Ministry of Trade.

Earth Sierra Leone, an Environment protection local organization, stated recently that it has discovered a significant number of loaded trucks of timber that had been smuggled through porous border communities to neighboring Guinea, noting that some Revenue Officers are allegedly conniving with the smugglers to bypass the legal trade network.

Although Revenue Authorities in Kambia District, Northwest of Sierra Leone, have denied having illegal dealings with the illegal timber traders, Earth Sierra Leone says the trade is mostly allowed to go through Guinea for onward shipment to China.

The Organization revealed that illegal timber trade in Sierra Leone are often in large volume and involve loggers, transporters, some government authorities, banks where financial transactions are done, and some major companies that have amassed wealth through the illegal business over the years; and all these are done at the detriment of mostly poor Sierra Leoneans and their communities.

Earth Sierra Leone is another local organization that produced a report on the issue in mid-2019, stating that the smugglers prefer paying US$2, 000 and below per long trailer vehicle instead of the normal US$4, 000 per forty feet container charged at Sierra Leone’s main port. “This is a huge financial loss to the state,” says Abu Bakarr Daramy, Executive Director of Earth Sierra Leone. Joseph Rahal, Director of a local Nongovernmental Organization, Green Scenery said his organization has been calling for a permanent ban on timber logging and exportation to save the country’s green environment and economic sector. “Sierra Leone has lost so much of its natural endowments that the government must put measures in place to ensure it benefits greatly now and in the future,” Rahal said.

“NLTCP should be supported for TB...