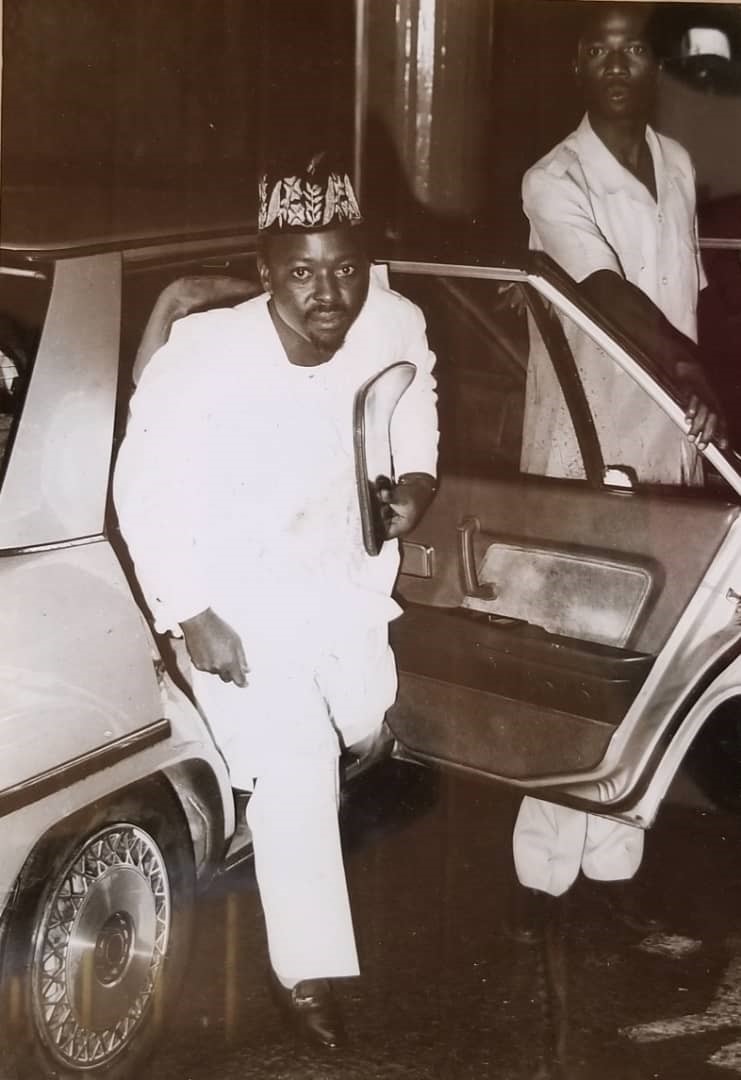 One of the oldest former Ministers of Late President Siaka Probyn Stevens and Late President Joseph Saidu Momoh era Hon. Hassan Gbessay Kanu has died on Wednesday 1st January 2020 at his Grassfield resident in the East End of Freetown Municipality.

After living a successful life in both politics and private, Hon. Hassan Gbessay Kanu peacefully passed away in his resident in Grassfield, and has been buried past Friday 17th January 2020 at his Joe Town Village, Koya Rural, Port Loko District.

Hon. Hassan Gbessay Kanu was born on April 2, 1944 at Morabie Village, Koya Rural, Port Loko District to a Mende mother, Haja Titi Koroma and a Temne father, Abu Bakarr Kanu. As a child he grew up in a small village called Joe Town with nine other siblings. He was close to his grandmother who introduced him to good morals, family values, and love for self and others. He was raised in the Muslim religion and also had great regards for African culture. Hon. Hassan Gbessay Kanu started his professional career as Chairman of Sierra Leone Airways in 1978. Among many of his achievements as Chairman, he protected the retirement age of Air Hostesses from 27 years to 32. He introduced policies that enable hostesses to marry and have children, raised benefits of engineers to the corresponding level of their European counterparts, and also assisted in promoting the Medical and General Insurance Company and served as the first managing director of MAGIC. Hon. Hassan Gbessay Kanu served as a Member of Parliament, representing constituency 95 from 1977 until 1991.

In 1980, he was appointed by former late President of Sierra Leone, Siaka P. Stevens as Minister of Mines. In his capacity as Minister of Mines, he introduced, enacted and supervised mining legislations and policies, declared Western Area a diamond dealing area, negotiated the reactivation of Marampa Mines with Austro Minerals, reorganized the opening of Marampa Mines under Austro Mineral, introduced oil exploration program, ensured the drilling of two wells (A1&A2) Offshore and established the GGDO. Among the many things Hon. Hassan Gbessay Kanu did during his tenure as Mines Minister, he developed the Gold Export License scheme and promoted gold exports, renegotiated Rutile/SIEROMCO contract for increased national benefit, contracted nationwide gold exploration by UN Agency and encouraged Sheik Abdullah Bin Raafah’s investment in NDMC.

For his outstanding work and dedication to the nation, in 1985, he was appointed to serve as Minister of Works, Energy and Power. Hon. H. G. Kanu supervised these combined ministries, Mines, Energy and Power. In these ministries, he accelerated the repairs to some National Power Authority machines, lit Freetown including streets lights after several years of blackout, supervised the completion of Dodo Hydro, contacted Denmark to extend power to Bo from Kenema and negotiated the grant for the cost of the transmission lines to Bo. He served in these ministries until 1987 when he was appointed Minister of Finance. In 1987, he was appointed as Minister of Finance by Late President Joseph Saidu Momoh. This was the period when the nation’s relationship with the international community was at the brink of collapse. As Minister of Finance, Hon. Gbessay Kanu successfully defended Sierra Leone before the Executive Board of the IMF/IBRD in 1988 and saved the nation from blacklisting. Hon. Hassan Gbessay Kanu strengthened and maintained strong relationships with the international financial communities including IMF, IBRD, etc. He supervised the Ministry of Finance with oversight responsibility over Central Bank, Commercial Bank, Insurance Companies and other financial institutions. In his tenure as Minister of Finance, Hon. Hassan Gbessay Kanu presented three budgets, created and supervised fiscal and monetary policies, installed government computer systems at the Treasury, reduced government’s payroll by 40% and established the Economy Policy Unit. Hon. Hassan Gbessay Kanu introduced policies for the establishment of SLRA, he enforced payment of all police revenue to the Treasury and pursued the policy to separate motor licensing activities from the police which resulted in the eventual creation of SLRTA. Hon Hassan Gbessay Kanu, introduced the monthly tax-free transport allowance for employees, proposed tuition free education up to completion of secondary school, stabilized the foreign exchange rate, introduced the Foreign Exchange Bureaus, abolished duties on agricultural items and news print, harmonized the Treasury and Bank of Sierra Leone Accounts and acted as 1st and 2nd Vice Presidents on 21 separate occasions. Hon Hassan Gbessay Kanu, was not only a political icon, he was also a keen businessman who created thousands of jobs for Sierra Leoneans. He created a thriving economy in his home town Joe Town that involved exporting of goods and produce around the world which earned him the award Master Farmer.

Hon. Kanu through his passion to create jobs for jobless Sierra Leoneans, he established Trans-world Insurance Company where he served as chairman and Chief Executive Officer until his death on the 1st of January 2020.

He was also appointed on the Board as President of WAICA and Chairman of Sierra Insurance pool. Among all of his duties, responsibilities and achievements, Hon. Hassan Gbessay Kanu’s greatest achievement was taking care of his family and beyond. He is survived by his wife Mrs. Hannah ‘Guinee’ Fine KJanu children, grand children, and great grand children at home and abroad.