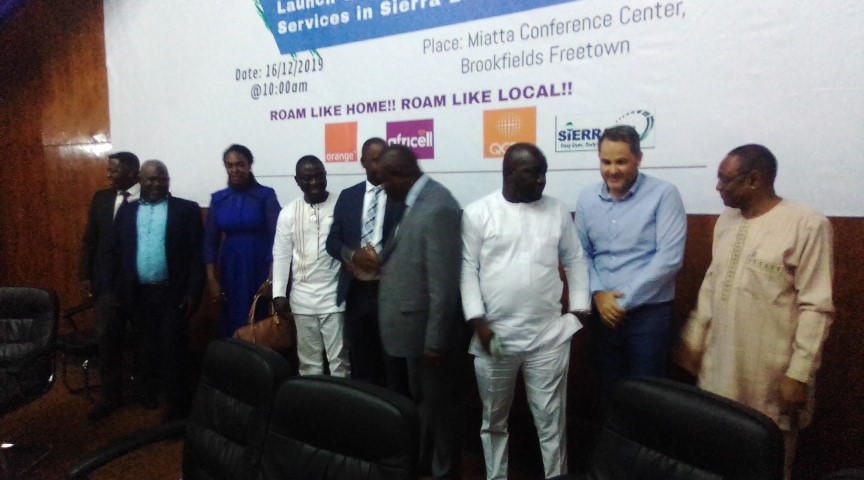 The National Telecommunications Commission (NATCOM) in collaboration with the Ministry of Information and Communications (MIC) and mobile network operators on Monday 16th December, 2019 launched ‘Free Regional Roaming Services’ with the theme: “Roam like home!! Roam like local!!” at the Miatta Conference Centre, Youyi Building, Brookfield in Freetown.

In his opening remarks, the Chairman of the occasion, the Permanent Secretary, MIC, Augustine Sheku Kamara, said the launch of the Free Regional Roaming Services is a laudable venture considering the huge impact it will bring to the country, noting that the Minister played a pivotal role to ensure that Sierra Leone benefits from the Africa’s interconnectivity drive.

The Permanent Secretary, Augustine Sheku Kamara, said the Ministry and NATCOM will continue to pioneer the process with both technical and financial support to ensure quality and affordable network services across the country.

In his welcome address, the Director General, NATCOM, Maxwell Massaquoi said the Free Regional Roaming Services are essential elements that will contribute to the expansion of mobile services.

Director Massaquoi noted that, NATCOM is the national authority for the regulation of ICT services in Sierra Leone which was established in 2006 by an Act of Parliament and that there is Board of Commissioners, one of whom shall be the Chairman.

Mr. Massaquoi assured that the Board would be very much determined and willing to go the extra-mile to ensure the full implementation of the Free Regional Roaming Services with support from the Government of Sierra Leone (GOSL) and international partners.

“We have accomplished the Sim Less Mobile Services with seven other sister countries in West Africa. Sierra Leone will be the 8th Country in the sub region to have launched the Free Regional Roaming Services. The new mobile roaming services was designed with affordable tariff system for all Members States countries including Guinea, Senegal, Togo, Bennie, Ivory Coast, Senegal, Mail and Sierra Leone,” NATCOM Director General confirmed.

He commended Government and Mobile Operators for their continuous unflinching support towards the entire process, whilst he also encourages consumers and the general public to cooperate with NATCOM for a successful outcome.

Madam Gobeh Kamara continued that the Ministry and NATCOM will collaborate firmly to enhance proper implementation of the Free Regional Roaming Services in Sierra Leone, adding that the Government is ready to support Universal Access to Telecommunication in Sierra Leone.

Director Bangura said the system will reduce all tariffs drastically in line with other sister countries despite the mobile company, be its Africell, Sierratel, Orange or QCELL, you will access the same tariff plan.

Director Cherif commended the Government of President Julius Maada Bio for exhibiting the desired political will to achieve the promotion of Cyber Security network protocols and Resilient Cyber Space. He said they be will continued to ensure strong collaborations with Sierra Leone for an effective and efficient implementation of the project for its intended purposes.

He recalled that, in November 2016, six nations’ team up together to form the African Interconnectivity Plan and that the exercise was initially piloted in Guinea, Senegal, Mail, Ivory Coast and later Togo and Bennie were incorporated into the process.