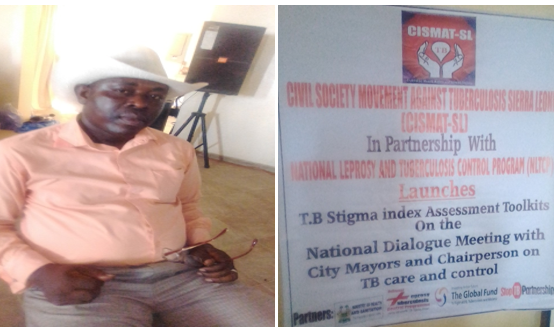 The national dialogue meeting which attracted representatives of the targeted groups from across the country was held at Hotel 55, Locust Step, Freetown on Thursday, December 19th, 2019.

Representing NLTCP, Sister Fatmata Sannoh maintained that her organization is a whole department in the Ministry of Health and Sanitation, responsible for the control of the spread of what she described as curable disease.

On the issue of prevention, Madam Sannoh said in 2017, they recruited Community Health Workers (CHW’s) whose role is to raise awareness on the danger and prevention of the ailment, identify TB patients and directed them to health facilities for treatment.

She pointed out that 180 PHU currently exists to provide Dot services, noting that X-Ray machines have been provided across all regions as well as the Gene-Xpert machine used to diagnosed TB signs and symptoms.

“Early prevention of patients is necessary in breaking the chain of transmission,” Sannoh told participants adding that Global Fund is their major partner as well WHO, NAS and other lined institutions. She applauded CISMAT-SL for their relentless advocacy kills in ensuring that the preventable illness is eliminated in society.

She described stigmatization as a wrong perception in society and emphasized that it is inhuman to stigmatize and discriminate people with TB. She sensitized that TB is an airborne disease but she said, as long as the patient is taking treatment, the infectious rate would be minimized.

“TB is infectious but could be cured as any other disease,” she confirmed and officially launched the Stigma Index Assessment Toolkit.

Representative from the World Health Organization (WHO), Dr. Kassa described TB as the leading cause of death in Sierra Leone, adding that twenty three thousand people globally developed TB annually.

As a nation, Dr. Kassa said Sierra Leone has experienced a significant reduction of TB cases in Sierra Leone, adding that WHO has developed strategies which have been adopted globally to reduce TB infection by 90% in 2020.

He advanced that one of the WHO’s components for 2020 is to engage communities and Civil Society Organization and continued that as system has appeared to be the strongest CSO in the fight against TB,  WHO would continue collaborating with it. He expressed happiness to be part of the engagement and affirmed that WHO would support the universal access to TB care.

He assured that WHO would also support the development of national guidelines and provides technical assistant, as well as the promotion of partnership and stakeholder’s engagement.

“Sierra Leone aimed at reducing TB cases by 95% in 2030,” he stated and spoke about the six thousand missing cases of TB, a situation he described as worrisome and alarming.

In her presentation, the Head of Mission for MSF, Jean Stowell explained that MSF which she described as a medical working organization came to Sierra Leone since 1986 and continued that they worked with the Ministry of Health.

“Our partnership in the fight against TB will continue,” she said and recalled that MSF was operating in Sierra throughout the war period in Sierra Leone. She frankly sated that MSF is working on TB because it is a global health emergency and discussed that they focuses on diagnosing children with TB.

Acting Director, CISMAT-SL, Pastor Paul Brima appealed to mayors and chairperson to heighten sensitization about the prevention of the disease and sensitized that the TB Stigma Assessment Toolkit will be used by any organization to assess TB stigma.

He described TB stigma as a process of devaluation and deliberated that various countries around the world came together to developed the toolkit.

Given background of CISMAT –SL, Program Manager, Mohamed Samura said it was established in 2009 by a former TB patient and dilated that their operations covered the whole country. “We have monitors who are supervised by district coordinators in all dot centers across the country,” he said and CISMAT-SL raises awareness on regional, national and international level.

He stated that they have established a Parliamentary TB Caucus which has been endorsed nationally and internationally.