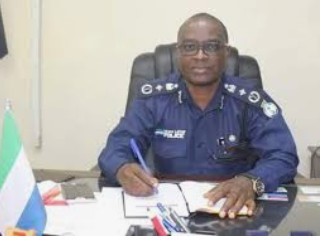 Former Deputy Inspector General of the Sierra Leone Police, Al- Sheikh Kamara, has for the first time since being relieved of his police duties breaks silence as he hits back at what he called malicious and baseless allegations linking him to trespassing police land.

His breaking of silence comes as a direct response to a press release dated 13th December, 2019 from the Anti-Corruption Commission of Sierra Leone which alleged that the former police chief trespassed a land belonging to the Sierra Leone Police.

This allegation, according to Al- Sheikh, is not only malicious and fallacious but also a clear ploy by the ACC and some unscrupulous individuals to dent his hard earned reputation.

In a piece widely circulated on social media, the former police chief had this to say:

“RE: ACC PRESS RELEASE OF DECEMBER 13, 2019 ON INVESTIGATIONS INVOLVING TRESPASS ON LANDED PROPERTY

My attention has been drawn to a Press Release by the Anti-Corruption Commission (ACC) on the above subject. It is alleged that I trespassed on a land belonging to the Sierra Leone Police (SLP). I have decided to hold my peace all this while for the safety of my family members who are still in Sierra Leone. But I need to break my silence for the very first time to let the public know that the said allegation is not only baseless but also misleading. I am aware of several attempts made by unscrupulous persons to dent my hard-earned reputation by making false reports of corruption against me at the ACC, but all have proved unsuccessful.

When I was initially informed about the ACC investigating a case of encroachment on Police land, my first reaction was “when has the ACC started investigating land encroachment matters, which I consider civil cases?”  When I was further informed that the aforesaid allegation was made against me, I never took it seriously knowing fully well that landed property is acquired through proper documentation. I wish to let the public know that none of the said land documents bears my name. Nevertheless, I relied on the competence of the ‘honourable’ Commissioner of the ACC, whom I am told is a lawyer of no mean repute, to deal with the matter professionally. I was, therefore, disappointed to learn that the ‘honourable’ Commissioner still found a way to make my name the focus of his investigations. If this is not a witch-hunt and deliberate attempt to tarnish my reputation, I wonder what else that could be.

In the first place, the ACC Commissioner is fully aware that the land in question is owned by Mrs. Aminata Ayesha Kamara. The fact that Mrs Kamara is my wife has little or nothing to do with her independence, and her right to own property. I am confident that the ACC is well aware of the Gender Acts recently legislated in Sierra Leone.  My wife is a God fearing and highly educated woman who has been in public service for nearly thirty years. Apart from engaging in business since school days, she has also worked for several reputable institutions both locally and abroad. As such, her sense of reasoning is such that she knows exactly what to do in trying to acquire a government land. She followed all due processes as a Sierra Leonean, and legally acquired the land in question from the government of Sierra Leone. I need not bore you with the details.

The allegation that I took the documents of the said land in 2005 is not only malicious and fallacious, but also clearly not a fact in issue. According to Police routine, all property (including important documents) are signed for by any requesting party. The ACC investigators would have done well to simply request the Way Book for such a transaction. Besides, copies of all land conveyances are registered and kept at the office of the Registrar General. So, if the Estate Officers of the SLP had misplaced their copy, all they needed to do was to search at the Registrar General’s Office. But NO! They needed to do somebody’s bidding by connecting Al Shek’s name to the matter.

On the other hand, for one of the false witnesses to suggest that Al Shek was so almighty and powerful that he was threatened by him in 2005 to hand in the said document is even laughable. In 2005, I was not even an AIG; how could he have been so terrified by a mere Chief Superintendent?  Moreover, I am known to be a disciplined officer who would never coerce any subordinate to carry out an unlawful act or order.  Besides, why would I need to take the said document when it is of little relevance in the process of acquiring another government land outside of the land in question?  Those false witnesses were merely trying to drag my name in the matter to smear my character. The mention of my name in the ACC Press Release could be purposeful, because it seems when Al Shek’s name is mentioned in a matter it makes news (as this has done).

I would refrain from getting into the merit of this matter. I would rather leave that with the legal experts. However, I wish the public to know that it was the SLP that in fact constructed the boundary fence between the said two pieces of land even before Mrs. Kamara had completed her building construction. That the ACC could claim to do an investigation and take a decision on what many consider a boundary dispute without both parties and their experts being present during the purported land survey leaves me with more questions than answers. That they could be at one and the same time investigators, judge and jury leaves many utterly baffled. That notwithstanding, the Commissioner is a professional and a ‘honourable’ man; I expected him to do that which is right.