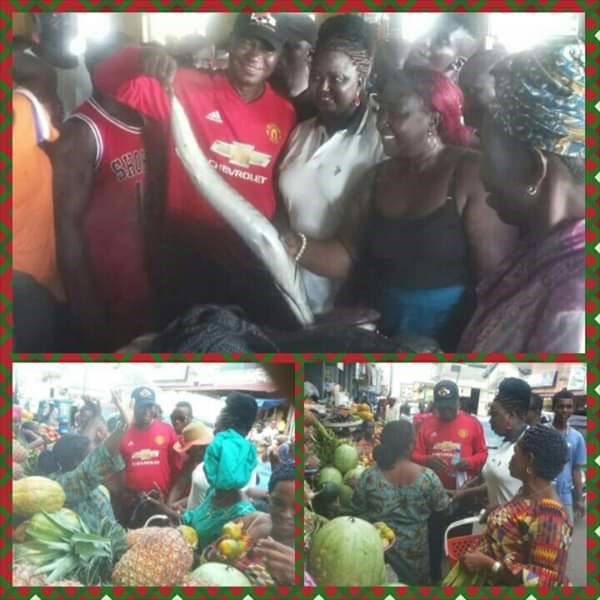 Since coming to the political limelight in the run up to the March 2018 elections after being selected as the All Peoples Congress candidate for the said election, his popularity has known no bounds. It cuts across every nook and cranny of the country and does not seem to be slowing down anytime soon.

This is further exhibited past Saturday, November 9th, 2019 at the Kroo Town Road Market where he was greeted by thousands of market women and onlookers who were in ecstatic mood not actually knowing what to do when he made an unannounced appearance at the market to buy food stuff and to determine the current state of affairs in the market. Others were just clamoring to touch him while the rest were just fighting to get a glimpse of him.

Day in, day out, Dr. Samura Kamara’s popularity continues to grow as evident in all public appearances he makes. Anytime he makes an appearance in public, mammoth of crowds gather around him in electrifying mood as they see him as the only hope of Sierra Leone.

Following his questionable and most narrow defeat in that election, Dr. Samura has proven to be the hope of the ordinary man in Sierra Leone as the ruling Sierra Leone Peoples Party continues to subject citizens to untold sufferings and hardship.

His humility, down-to- earth personality and his messages of hope resonates well with the suffering masses and this has attracted majority of Sierra Leoneans to him. Even his political opponents and those sitting on the fence could not help but admire the kind of personality he is.

With the kind of support and popularity he enjoys now, it clearly sends a signal that Dr. Samura Kamara is the obvious choice of the majority of Sierra Leoneans, who now look up to him as their political Moses. His growing popularity also sends a clear message to the main opposition, All Peoples Congress (APC) party hierarchy that they have no other choice than to give Dr. Samura Kamara a second chance in order to redeem his country and its people from the clutches of SLPP’s misdirection.