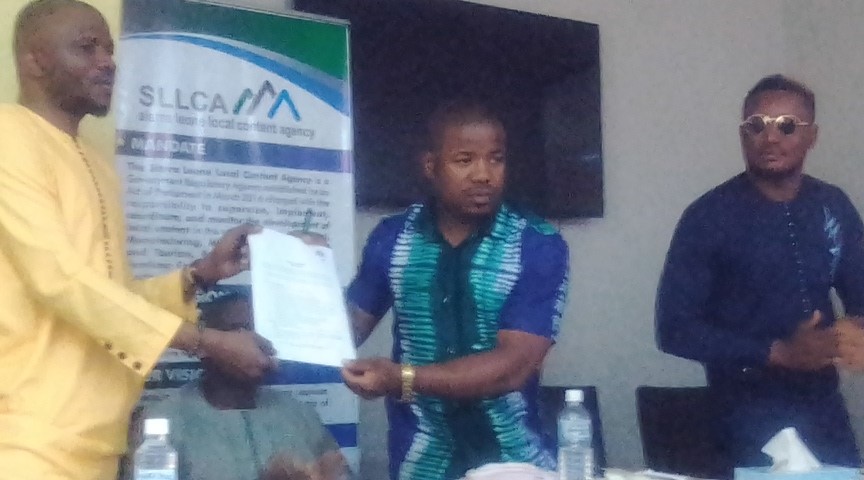 The crowning of Arkman was disclosed in a news conference ahead of the 31-day Arkfestical 2019 and signing of a Memorandum of Understanding  (MOU) between SLLC, AYV and Arkman Music Entertainment Team at the AYV Media Empire building  on Wesley Street in Central Freetown.

In his key note address, the Director General of SLLCA, Fodeba Daboh said the Agency is a Government regulatory body established through an Act of Parliament in March, 2016. He noted that the Agency is charged with the responsibility to supervise, implement,  coordinate and monitor the development of local content in the sectors, such as industrial manufacturing, mining, agriculture, hospitality, among others.

Director General Daboh furthered that SLLCA also deals with the procurement  of goods and services including construction,health, education and the energy sector.

Mr. Daboh said because of Arkman’s excellent performance in the Sierra Leone music industry, the Management of SLLCA thought it expedient to honour Arkman as the Brand Music Ambassador.

He commended President Dr. Julius Maada Bio for demonstrating the political will needed to transform Sierra Leone in diverse ways, especially with regards locally made products.

Speaking on behalf of Arkman Music Entertainment, the Principal Manager, Abdul Karim Kanu aka Karistmatic said the Arkfestival is scheduled from 1st December, 2019 to 1st January 2020, noting that the rational behind the Arkfestival is to promote national tourism and culture.

He furthered that the Arkfestal is geared towards promoting the Local Content Products through music, drama, comedy, sports, product exhibition and management.

Arkfestival, Mr.Kanu said, is organized specifically to showcase the good image of the country through music, drama, culture, tourism and hotel management, adding that the festival would be staged at the Freetown Amusement Park formally called Victoria Park.

He expressed thanks and appreciation for the timely recognition of Arkman to be Local Music Ambassador from 2019 to 2020.

Mr. Kanu disclosed that there would be series of social and cultural activities the former Victoria Park in line with the theme of this year’s exhibition: “Promoting locally made Products in Sierra Leone.”

Manager Karismatic asserted that when it comes to Sierra Leone music, Arkman is always setting the pace with superb performances to wet the appetite of people. He furthered that it was due to his glowing performances in the music industry that the Management of SLLCA and AYV thought it wise to crown him the new local music ambassador.

Mr. Kanu appealed to both the foreign and local investors to cooperate with the Arkfestival Team by securing business booths at the venue in a bid to promote local products.

He also expressed appreciation to the Africell mobile company for promoting young talents  through music, sports, entertainment, comedy, health, education and other sectors that need support, noting that the mobile company is the sole sponsor of Arkfestival and the Arkman Music Entertainment in particular.

Mr. Kanu commended SLLCA, AYV, Africell, Management of the Freetown Amusement Park and other private partners for recognizing the effort and hard work of Arman.

He assured Sierra Leoneans and tourists visiting the country of maximum security presence with regards the protection of lives and properties.

Speaking on behalf of the Chief Executive Officer of AYV Media Expire, Ambassador Anthony Navo Jr., the Managing Director of AYV, Dr. Ezekel Duramany Lakkoh said the MOU was timely and significant, noting that his boss did not grace the occasion due to his tight schedule.

Dr.Lakkoh commended the Management of Arkman Music Entertainment Team for its collaborative work leading to Arkfestival 2019, adding that they just need to expand their production packages for more goals.

The Managing Director furthered that the AYV Media Empire has always been signing MOUs with several artistes to promote the Sierra Leone music industry, adding that the Arkfestival show would be broadcast live on AYV.

Dr. Lakkoh encouraged the Arkman Music Entertainment to continue collaborating with other groups and that it is only through firm collaboration that they will be able to move the entertainment industry ahead as a nation.

He assured that AYV would continue with its unflinching support towards promoting the Sierra Leone Local Content Policy.

In her goodwill message, the Managing Director of Freetown Amusement Park, Ms Leona Aboko Cole said on behalf of her Management that she was very much impressed with the MOU, noting that the Amusement Park is well set for the Arkfestival 2019 with standard facilities for both adults and children.

Ms Aboko Cole said she expects that the Arkfestival 2019 will be very superb and interesting with the presence of valuable customers including tourists and locals.

Responding, the renowned Sierra Leonean artiste, Arkman expressed gratitude to SLLCA, AYV and Africell for announcing him as the Brand Local Music Ambassador in Sierra Leone.

The National Tourist Board (NTB) and representatives of various music labels also make meaningful contributions to the occasion.