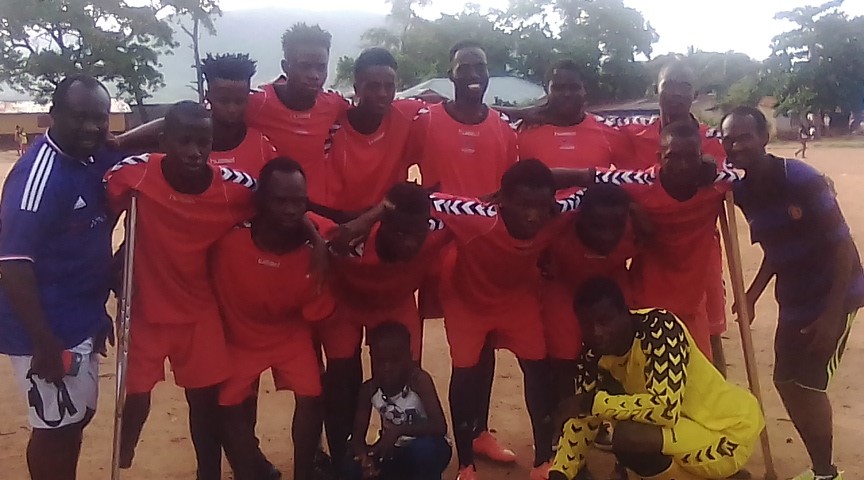 This was made known by the player’s manager, Mohamed Lamin Koroma (aka Coach Vidal) during the player’s first friendly match against Future Generation Football Club aka MSK Tele Center at the Evangelical Baptist Secondary School Practice Field ,on Sunday, 20th October 2019. The technical manager of the player, Mohamed Lamin Koroma (aka Coach Vidal), said the player was taken from his team to perform international duty for  the Sierra Leone National Amputee Football Team in Angola noting that the player was able to prove himself during the Amputee tournament which is the reason why clubs are behind his signature.

Coach Vidal said the player was contacted before his return from the tournament by a Ghanaian Polio Club and also other good offers from Liberia Polio Team.

He said his player was spotted during the tournament due to the impressive and aggressive trainings he usually conducted on every Sundays at the Baptist School Field.

Coach Vidal noted that ,the interest shown by the different polio clubs demonstrate that his player is a business oriented player and that he is a utility player that can play anywhere in the field. He continues that he had already received lucrative contract from a Ghanaian Polio Football Club for his utility player, Captain Gbassay Koroma to play in the Ghanaian Amputee League Tournament, 2020.

He reiterated further that, the welfare of his player was not well taken care properly, adding that his player was compensated bellowed expectation considering the resources he had been put towards up keeping the player from junior to senior level.

He said the whole National Polio Team was never treated humanely as National Amputee Players compare to other countries. He said his player was in a sad mood on his returned due to the way they were treated during the initial stage of the trip to Angola with challenges on documentation and funds.

He expressed appreciation to the Western Area Rural District Chairman, Kashor Holland Joseph Cole and Madam Zainab Sheriff for supporting the Polio Football Team activities, adding that these two personalities have been so supportive and has also intended to stage and organized a tournament in December 2019, so as to be able to play more competitive matches to keep the team active or fit for any future Amputee tournament.

He said, he is ready to accept any international offers for his players because Government through the Ministry of Sport and other sporting bodies had not been sponsoring the Sierra Leone Polio Football Team and that he has been on this training for various categories ranging from kids level, Junior and senior level since 2012.

In his victory mood, the Technical Coach of Future Generation who also serves as the Deputy Youth Chairman, Ibrahim Santigie Sesay, Cole Town Community said his side was lucky to hammer Polio FC with a bid margin of goals, noting that the match was scheduled to celebrate the birthday of an active lady, Madam Kadija and also on the side of Polio FC is to honor Captain Gbassay on his first appearance for the National Amputee Team.

He commended Coach Vidal for his passion to promote disable football at all level and congratulated his squad for a brilliant performance to thrash Polio FC.