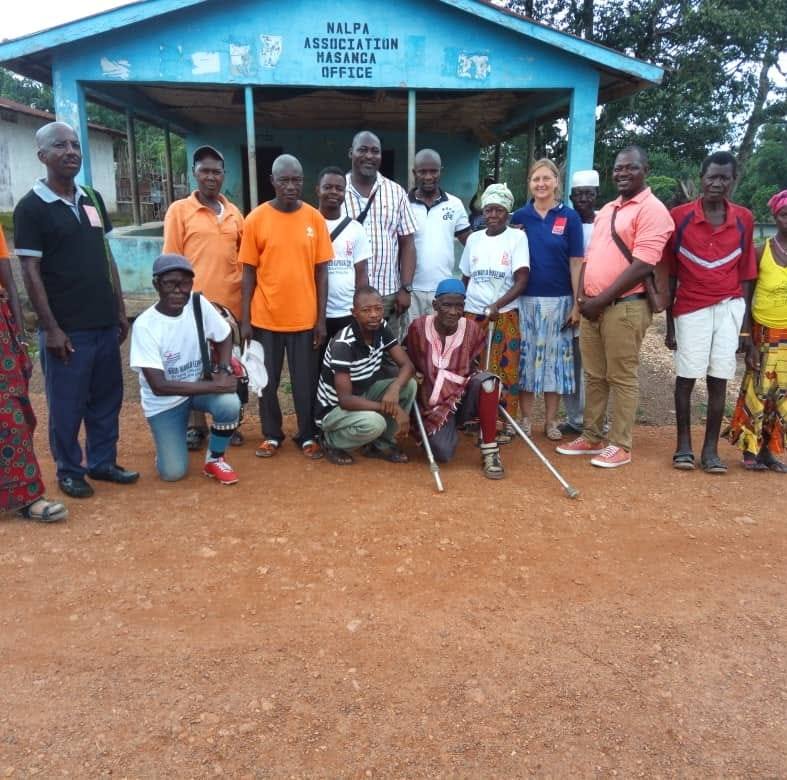 Alusine Baimba is a 42 year old Sierra Leonean and an indigene from Moyamba District, and is affected by the Leprosy bacteria which made him suffer stigma and discrimination in school and his community. (Photo: National Association of Persons Affected by Leprosy Sierra Leone NAPAL.SL)

According to the World Health Organization (WHO) Leprosy is a skin and nerve condition which is contracted and transmitted when a person breathes in the Micro-Bacteria Leprae. When this bacteria is inhaled it finds the cooler part of the body which are not exposed and yellowish patches will start to appear in these parts of the person’s body, a sign that the person’s nerve is slowly becoming numb and moving to clawing stage.

As he explains his story, it was in 1986 and Alusine was 8 years and his parents had no knowledge of such a disease took him from one native doctor to the other seeking solutions to the strange yellowish patches on their son’s body. “After a year with no remedy in sight, my parents lost hope, by then my hands had reached clawing stage and badly affected with the bacteria”, Alusine noted.

He added that he had to live with the condition until field staff from the German Leprosy Relief Association (GLRA) established in Sierra Leone in the mid sixties came to his community, and that was the time his parents knew he had been affected by the leprosy bacteria. “This was when my agony of stigma and discrimination started, after the GLRA opted to care of my condition and support me through formal education in Freetown”. Alusine explained that during his primary schooling at REC Ogoo Farm around the Western Peninsula he was ridiculed by both his class and school mates because of his condition and despite stern warnings from the school authorities, the stigma and discrimination did not stop.  He said GLRA wanted to take him off the school to another, and this was when, “I made up my mind to fight and beat the two and made a promise to myself and guardian that I will study hard to be at the top of the class, and it worked, I became the envy of my school mates as I started taking first and second positions during the academic year and it was bye-bye to stigma and discrimination till I finished both primary and secondary education”, Alusine narrated smiling.

Alusine Baimba, a Father of three did not relent or allow his condition to deter him from his academic pursuit, he successfully went through teacher training college and he is a teacher by profession, but said he only does part time teaching as he is now occupied and the National Coordinator of the National Association of Persons affected by Leprosy, an Organization that is being supported by the German Relief Leprosy Association (GLRA) to encourage and bring together affected persons to mobilize resources for increased public education and early detection, using the multi-drug therapy which is free of cost. The drug was introduced by WHO, in the mid-nineties and has proved to be very effective. He noted that the Association of Persons affected by Leprosy are involved in micro-finance and other income generating activities to support those that are badly clawed and incapacitated to stay alive.

Concluding, Alusine Baimba called on government through the health sector to revamp surveillance in order to further reduce transmission and disability rate, across the country.