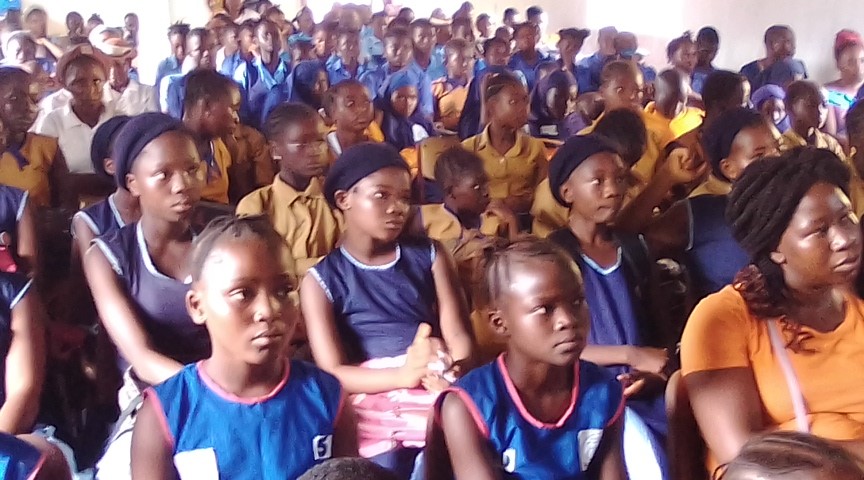 Caritas, Freetown in collaboration with the Sierra Leone Adult Education Association (SLADEA) have on the 4th October 2019, gave technical and financial support to the launching of Human Solidarity Organization (HSO) to promote awareness on Gender Based Violence, Early Marriage and Teenage Pregnancy in six schools with the motto: :Human Development”, at the Christ Standards Secondary School, Hastings Community, Western Rural District.

Giving the purpose of the event, the Founder and Chief Executive Officer (CEO) of Human Solidarity Organization, Mr. Idriss Gibson Mansaray, thanks Caritas Freetown and SLADEA for supporting his organization with both technical and financial support, noting that the purpose of the event is to train 120 school pupils and 6 teachers from six different schools at Hastings environs on advocacy, sensitization and access to justice processes and procedures.

The CEO said his Organization is a Community Based Organization (CBO) that was established with a focus to enhance human development which is operating at the Hastings vicinity with bulk of the membership were all women from higher learning institutions.

He said his organization will organized  trainings for Pupils Advocacy Forums (PAF) that were established in schools ,adding that Caritas Freetown was the first humanitarian group that had initially provided financial and technical support for the establishment and repositioning of Human Solidarity organization.

Mr .Mansaray continued that, the training will enhance the knowledge and skills of Pupils that are members of the established Advocacy Forums in their respective schools and communities. He disclosed that Human Solidarity had received grant from SLADEA since the 1st June 2019 to implement a project on promoting Awareness on Advocacy against Sexual gender based violence, early marriage and teenage pregnancy.

The humanitarian expert reiterated further that, his organization was also able to attract support from SLADEA due to the magnitude of their campaigns on Sexual offences cases to promote girls and women empowerment.

Delivering the Key Note Address, the Programme Manager, Caritas Freetown, Alfred Tamba Charles, expressed gratitude to the organizers and school children for the inspirational gender based violence and sexual assault drama performances to mark the event with educative campaign messages.

Mr .Alfred Tamba Charles told school girls to be bold enough whenever they are confronted by some unscrupulous men who may want to disturb their education and also destroy their virginity from various communities as the play demonstrate. He said, he always loves to show case teacher to pupil relationship to enhance quality learning and information sharing forum.

He recalled those days when health workers in most government hospitals, charged pregnant women differently for birth delivery of a bouncing baby boy to that of a girl but he expressed appreciation to the government for sustaining and reinforcing the Free HealthCare Delivery to another level that had address such happenings.

He said, all children whether boy or girl are equal in the sight of God despite of sex or religion adding that school girls should been given more preference to attain quality education for rapid national development.

Mr .Charles noted that ,before now it was very difficult to see a women raise to higher position and that the highest stage for women was always first lady but now he said ,women were at the  top level of governance system and that the scenario had change drastically with regards the negative perspective about girls due to

He said young girls should always be mindful of their importance in the society and focus on their education strongly to promote national development, adding that when you educate a girl, you have educate a nation but when you educate a boy, you only educate an individual which is why they are supporting Human Solidarity Organization to promote awareness on Gender Based Violence, Early Marriage, and Teenage Pregnancy in schools added that, Gender is a social construe which needs key consideration.

He said Teenage Pregnancy means when a girl is under the consented age of 14, 15 or 16 and that unless a girl is fully 20 years old before she can able to give birth without any health complications. He advised young girls not to encourage early pregnancy because according to him, he said, if a girl attempt at their age will not survey in the course due to weak female parts or functions.

The Caritas Programme Manager disclosed that ,according to the last demographic and house hold survey by Statistic Sierra Leone ,on these same issues of teenage pregnancy, state that 28% of girls who are teenagers have given birth in Sierra Leone  ,adding these issues are the main course of the economical burden that the country is currently suffering from or undergoing.

He said young girls should not allow their male counterparts or colleagues to dominate them in the area of attaining higher education while he also commended the first three girls who did well during the just concluded National Primary School Examination.

He spoke on the interference that usually took place in various communities when some perpetrators of sexual offences were brought to the police station, noting that many cases were been compromised from communities and police stations due to acute poverty and lack of knowledge.

He recalled recently that, for the first time, the Parliament of Sierra Leone had passed a law on Sexual Offences Act on minor is life imprisonment and that the law is explicit this time round to address these bad practices.

He expressed dismay to some teachers who are in the habit of exhibiting sexual transmitted grades to destroy the image of young girls. He revealed further that, for 2018 alone, the Rainbow Centre who is charge with the responsibility to address Sexual Offence Cases recorded a total of 3500 cases in five districts and that this year alone in the first quarter they had also recorded 1400 cases.

He appealed to community people and the general populace to come onboard and fight against Gender Based Violence, Early Marriage, and Teenage Pregnancy in Sierra Leone.

Madam Turay advised young girls not to allow men or boys confused them in their learning process and that SLADEA is supporting these activities for six school pupils of these six schools.

She encouraged the 120 participants or beneficiaries to disseminate this information to other schools so that they can teach them what they had learnt on this workshop and training guide to prevent themselves from unfortunate incidents.

“Women and girls issues are everybody concerns. If we educate a woman, we have educated a nation. Let us be agent and ambassadors for change to educate others with whatever we have learnt from the workshop,” SLADEA Project Officer Aves.

She admonished young girls to refrain from early sex as education is the key to success and self esteem in society while she assures the gathering of SLADEA continuous support to Human Solidarity and other humanitarian organizations to promote women and girls issues in Sierra Leone.

On her security message, the Acting Line Manager, Hasting Police Station, Inspector Zainatu Turay expressed happiness to the organizers for recognizing the Police in the fight to eliminate or reduce Gender Based Violence cases in the locality.

Inspector Turay said the number of sexual offence cases between 14 to 15 years that are reported in their station is alarming and police were always blamed for reasons best known to them.

She appealed to community authorities and other humanitarian organizations to continue collaborating with the police with regards women and girls issues. She advised girls to feel free to report sexual assault matters to the police so that they can be protected from sexual perpetrators.

Madam Turay spoke on the other recent incidents that have to do with child trafficking and sexual penetration which she said was also on the increase especially when schools were closed and up to date, they are receiving reports on daily basis.

She disclosed that, they are now having juvenile court in the Western Area Rural District Council, Waterloo for under age perpetrators who are in the habit of chasing their counterpart in schools and communities.

However, the event was graced with rich messages from other valuable speakers including, the Hasting Village Headman Representative, the Councilor for ward 394, and the Chairman for Hasting Community Association, while Pastor Momoh Conteh and Pa Alhaji Bangura deliver messages of blessing to the project which is expected to last for the next four months.