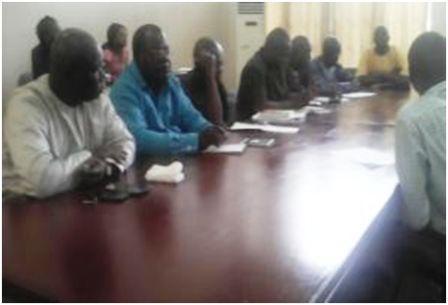 Freetown, November 4 (SLENA) – A Non-Governmental Organization, FORUT, on Friday engaged the Parliamentary Committee on Internal Affairs at the new Administrative Building at Tower Hill in Freetown on the need to support the development and implementation of a National Alcohol Policy in the country. (Photo: Parliamentary Committee members and FORUT)

FORUT’s International Programme Director, Stale Stavrum, said the engagement with Members of Parliament was to enable them see the menace of alcohol and the negative impact it was creating in the lives of people particularly young people.

According to Starvrum, despite all the negative things about alcohol consumption much has not been done in that direction. He noted that as an international organization, they would like to bring some of those negative things to light to save the lives of Sierra Leoneans. He therefore admonished MPs to support them, both in the formulation of the bill and its ratification in Parliament.

The Committee members were very concerned about the high level of alcohol in the market, noting that some of the producers particularly Indians were not guided by any serious law to manage the consequences of alcohol consumption.

Hon. Alimamy Gibril Kargbo said the world was being polluted with alcohol, saying that as Members of Parliament they were worried especially for the young people whose contribution to national development was not encouraging. He noted that they would continue to support the instrument and the organization to ensure that the bill became a fait accompli.

The deputy chairman of the Committee, Hon. Alie Kalokoh, appreciated FORUT for such a venture, considering the level of alcoholic drinks being produced in the country. He stated that although Government was looking for employment opportunities, the country, however, needed strong laws that would guide alcohol producers because the health of their people was paramount.