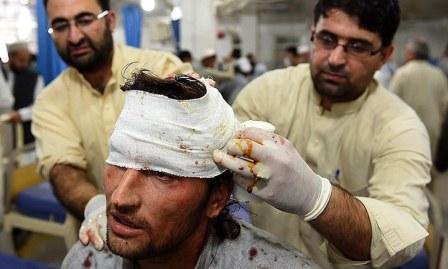 A 7.5 magnitude earthquake struck Islamabad and other major cities of Pakistan on Monday, 26th October, 2015, leaving at least 140 dead and scores injured due to stampedes, building collapses and landslides. (Photo: One of the victims being rushed to the hospital)

The two officials, Sierra Leone’s Ambassador to the Islamic Republic of Iran who is also accredited to Pakistan, Dr. Muhammed B. Fofana and M.B. Jalloh, Sierra Leone Press Attaché based in Riyadh, Saudi Arabia and concurrently accredited to Sierra Leone Embassy in Iran and its areas of accreditation had completed a fruitful meeting with Pakistani Foreign Office officials when the earthquake struck.

A teenager rescued from a stampede

“The Almighty Allah saved our lives and we are back in our hotel after a very busy official engagement with Pakistani officials today,” the Ambassador says shortly after the incident.

He however expressed grief over the loss of lives in the natural calamity. The envoy sent condolences and heartfelt sympathy to the bereaved families of the victims of the tragic incident. “Our prayers and thoughts are with the brotherly people of Pakistan during this difficult period,” the Ambassador told the Director for Africa Affairs in the Ministry of Foreign Affairs, Babar Hashmi.

The Ambassador is scheduled to meet with the Advisor to the Prime Minister on National Security and Foreign Affairs, the Ministers of Health, Commerce and Agriculture in the next few days.

Pakistani media reports say the death toll could rise in coming days because communications are down in much of the remote mountainous region.

Conakry, the Republic of Guinea, 4 Octob...