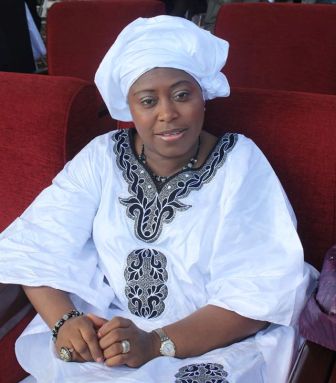 Kono, Jan. 29 (SLENA) – Wife of the Hon. Vice President of the Republic of Sierra Leone, Mrs. Khadija Sam-Sumana this past Sunday donated a brand new Caravanm bus to the Kono Women’s Movement for Peace (KWMP) to aid them in the discharge of their functions.

Speaking at the ceremony which was held at her husband’s premises in Carpeteh, D.O. Barracks Road, Tankoro, Mrs. Sam-Sumana thanked the women for educating their fellow women about the dangers of the ebola virus and ways to eradicate the disease in the district.

She said His Excellency President Koroma and government is not happy about the increasing death toll the ebola outbreak has caused in the district and that it was not of government making neither was government expecting such an outbreak in the country.

Mrs. Sam-Sumana went on to thank the women for adhering to their bye-laws and advice given out by the government and traditional rulers in the fight to end the killer virus. She called on them to embrace one another and put aside all malice and come together to eradicate the disease in the country.

Meanwhile, Mrs. Sam-Sumana acknowledged the good gestures of the Mother of the nation, Mrs. Sia Koroma and her sister, Madam Finda Koroma to the women of Kono, adding that she too had joined them in their generous moves.

She called on the women to show appreciation of the good gestures they have received so far by handling such gestures with care and used them for their intended purposes as more goodies are in the pipe line.

“I need unity and peace among you and the people of Kono district are now working as one family.” Mrs. Khadija Sam-Sumana advised and encouraged them to be pacesetters to other districts including that of  Kono district.

Expressing thanks and appreciation on behalf of the organization, one of the committee members, Madam Kumba Fillie said the donated vehicle is a new beginning for the organization, assuring Mrs. Sam-Sumana that the vehicle will be utilized for it intended purpose.

She gave a brief background leading to the establishment of the organization which she said was established during the ebola outbreak with it aim to educate women in the district about the threats, prevention and control of dreadful disease, adding that as part of their achievement their members have been recruited in the social mobilization exercise of DERC.

She said the organization which is non-political was set up to sensitize women on the importance of peace in the district and the country as a whole.

“We women have stood up for peace in Kono district and we must achieve it.” Madam fillie emphasized.

As people go back to their old tri...