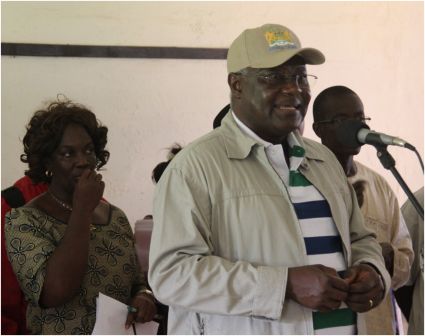 Addressing 49 discharged patients that survived the Ebola deadly disease from the Hastings Ebola Treatment Centre at a ceremony held at the Police Training School Keith-Lewis conference hall at Hastings, President Koroma commended the combined efforts of the Military, the Ministry of Health, the Police and auxiliary staff at the centre, for the tremendous work done at the centre and the success story in giving life to people. He underscored the importance of seeking early treatment as there are chances for people to survive the disease.

The President said the strides by the Ministry, and the government is a movement of hope, that calls for us as a nation to demonstrate to the world our collective efforts and solidarity as patriotic citizens in the fight against the Ebola virus disease.

He noted the level of preparedness and commitment by the staff, and the case load coming into the facility since its inception on September 19, 2014 and the professional handling of the cases by local professionals.

President Koroma in group photograph with the Survivors

President Koroma appealed to the general public not to stigmatize the survivors but to accept them as infection free from Ebola, and no longer a source of infection.

Ebola the President said is real, and still around us for our collective efforts to contain the disease and stressed the need on the importance of putting in place post Ebola structures towards the end of the epidemic.

He called on the youths, Paramount Chiefs, Teachers, other community leaders to act as Contact Tracers, Surveillance Officers and watch dogs in the fight to contain the outbreak.

Health and Sanitation Minister, Dr. Abu Bakarr Fofanah described the event as historic in their collective efforts to eradicate the Ebola disease in the country.

The treatment offered to the survivors by local staff, the Minister said, is a signal to the rest of the world that Sierra Leone as a nation can do it.

He commended the staff at the centre for the low case fatality, and appealed to the different communities of the survivors to accept them as they are no longer infected by the disease.

The Minister in declaring war against stigmatization, demonstrated physical contact with the survivors by shaking their hands.

The Doctor In-Charge and Manager, National Onchocerciasis and Non-tropical Diseases Progamme, Dr. Santigie Sesay expressed delight over the success of their collective efforts including the support from the Ministry, the government and the leadership of President Koroma.

He said their support is a manifestation of the success story in the fight to save life and the healing of the 49 survivors.

Dr. Sesay disclosed that from the opening of the centre in September 19, 2014 to October 5, 2014, they have recorded a cumulative admission of 175 with low case fatality.

Some of the survivors, Dr. Sesay said are now orphans, and appealed for humanitarian assistance.

He assured his audience of their continued commitment in the discharge of their duties, and promised to redouble their efforts in the fight to contain the disease.

Other speakers include the Deputy Minister II, Madam Madina Rahman, the Inspector General of Police, Francis Munu, the Chief of Denfence Staff, S.O. Williams and the Chief Medical Officer, Dr. Brima Kargbo who chaired the occasion.

Highlights of the event include the physical contact with the shaking of hands with the survivors by the Minister of Health, Dr. Abu Bakarr Fofanah, and the presentation of Discharged Certificates and packages of food and cash to the survivors.