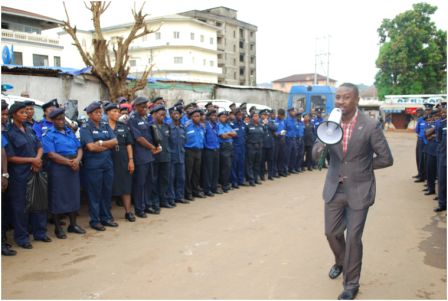 As part of Anti-Corruption Commission’s endeavour to further strengthen the untainted relationship with the Sierra Leone Police (SLP), the Public Education and Outreach Department of ACC on Monday 26th May, 2014 met with officers of the Central Police Station in Freetown.  (Photo: ACC PRO Alhassan Kargbo making his presentation)

This engagement which attracted well over eighty five officers, including senior personnel of the Central Police Station was meant to bring together the Sierra Leone Police and Anti- Corruption Commission to discuss issues surrounding the fight against graft in Sierra Leone, especially the spate of bribery within the SLP.

In welcoming the team from the ACC, Chief Superintendent of Police M.B Kamara Esq. reaffirmed that the ACC is not anti- police, but was established to complement the work of the police.  He went on to say that the duty of the ACC was dispensed by the SLP, not until after the enactment of the 2000 Anti-Corruption Act, which brought into effect the relinquishing of such powers to the Commission.

ACC and SLP in Group Photo

Presenting on the rationale of the meeting, Head of Public Education Unit Michael Sesay said one of ACC’s valid partners in the fight against corruption is the Sierra Leone Police.  He stressed that the ACC’s interaction with the SLP will further cement the relationship between the ACC and the SLP.  Mr. Sesay stated that the ACC will hardly succeed without the support of the SLP, pointing out specific areas where the SLP had collaborated and instrumental in the fight against corruption.

The Public Relations Officer, Alhassan Kargbo spoke on corrupt practices as in the 2008 Anti-Corruption Act, with emphasis on those offences relating to the operations of the Sierra Leone Police.  Dilating on the offence of Corrupt Acquisition of Wealth, as it relates to Possession of Unexplained Wealth, Mr Kargbo pointed out that, when a public officer’s wealth is far more than his legitimate pecuniary resources, he stands to explain his sources of wealth in the court of law, when indicted by the ACC. Mr Kargbo hastily stated that it eventually becomes an offence when a public officer fails to provide reasonable explanation for all his possessions.  ACC’s PRO also explained other offences in the AC Act such as Offering, Soliciting, Accepting advantage, Peddling Influence, Misappropriation of Public and Donor Funds, Abuse of Office and Abuse of Position; as offences likely to be committed by police officers.

Addressing the gathering, AIG Vincent Nabieu; Director of Road Safety and Security of the SLP described the relationship between the SLP and ACC like that of the “teeth and tongue”. The SLP and ACC are in the same vessel of law enforcement but yet with different functions. He entreated his colleagues to accept the ACC’s move in good faith, as there are key messages within the presentation that will help them carry out their duties professionally. Mr. Nabieu encouraged the ACC to be organising such meetings in order for police officers to be armed with power and knowledge on how to conduct themselves in their various assignments.

Speaking on partnership and reporting procedures, Miss Glenis Frazer, Head of Outreach Unit of the Anti-Corruption Commission, encouraged police officers to transfer all corruption cases which do not fall within their remit to the ACC. She made public the free toll lines and assured them of informant and whistle blower protection; at the same time advising them to desist from sending libellous report to the Commission, as it is an offence in itself.