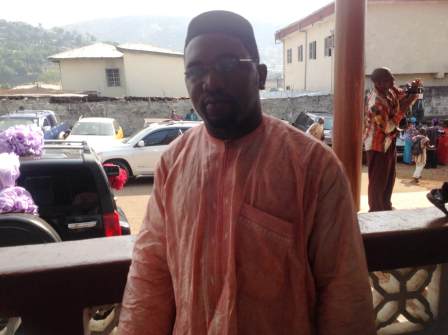 It was probably around 7:30 a.m.  Owing to the snail pace of the traffic, particularly from the west end of the city, his wife and kid had already left home for school and work respectively.  Then, I woke up.  The light in his bedroom was off and so too was the one in the living room.  Strangely though, the kitchen was alight.  It was busy and an aroma that could make the hungry much more famished with a very strong desire for a taste of whatever it was came from that direction.  My taste buds started salivating and like a deadly Lion in search of its prey, I dashed for the kitchen and there he was – Ismael Koroma (I.K as he is fondly called) busy preparing breakfast in the absence of his wife.   (Photo: Ismael Koroma)

For those few minutes, he forgot that he was not only a lecturer at the university but one whose name had already been penciled down on the President’s list of latest appointees waiting for what Umaru Fofana aptly calls, “ the next Friday Cabinet reshuffle.”

Soon, the breakfast was ready.  And after the dishes had been washed and stacked in the shelves, I whispered into his ears, “Youngman, your cooking abilities would strongly compete with your teaching skills as much as they would do when you are on Radio or TV or in front of a large audience on stage.” He briefly smiled and replied, “Youngman, I do this quite often for my wife.”

Not long after that, it was Friday.  Then, the rumor mill started.  Text messages, Viber and WhatsApp went overdrive.  As Facebook was a major reference point, especially for us outside of the country, I quickly logged on and there it was  Jarrah Kawusu-Konte had broken the news.  The man who was a cook just few days ago had been appointed Sierra Leone’s Deputy Ambassador to Ethiopia, African Union and the Economic Commission for Africa.

He is set to join and serve in an organization whose conference was hosted in Sierra Leone (then as Organization of the African Unity – OAU) when he was literally in diapers (barely one-year-old) in 1980 and this speaks volumes of the President’s desire to turn to not necessarily the grey heads but to men (also women) with ‘Amazonian chins’ (without beards) and not too rounded and protruded stomachs for appointments into positions of trust.

Today, IK may be smiling over the confidence reposed in him to serve his country in Addis Ababa but he was not one who was born into the privileged class nor has he been a politician.  In fact, as you consume this piece, he might still be in class teaching his Mass Communications students at Fourah Bay College.  In his words, “I went to school barefooted and with a ‘rafia’ bag at St Edwards Primary school.”

Though his parents hail from Koya just like the late SAT Koroma, Chernor Ojuku Sesay and Unisa Deen-Sesay to name but a few, it was in the Foulah Tong environs in Mountain Cut where IK was born and raised.  And like any normal kid would do and in the absence of those pastimes exclusively left for the affluent, he played football barefooted in the dusty pitches of Mountain Cut, Parade and Fire-Force.  For him, “Balance-Ball, Six Cup and Botkidie (a Themne derivative for put it inside) were his best games.

At Model, the Secondary School he attended, IK was very active in drama and as a continuation of his strong reverence for Islam, he was made the school Imam in addition to his position as School Prefect.

In 1998 when he bade farewell to high school, IK decided to enter the risky, mostly neglected and less paid profession of journalism, not because there were no better options but it was his dream to use his pen and later, his microphone to do what he loves and knows best – writing and talking.  Through this, he believed he could enter the homes of many and sat with them when they discussed at their dining tables the burning issues of the day.  His inspiration for this calling could be credited to the likes of our own Lansana Fofana, Nigeria’s Sola Odunfa and Kwaku Sachi Ado of Ghana.  (All of these have worked with the BBC).

Thus, his journalism sojourn actually kick started as a cub reporter.  He was an apprentice to Emmanuel Turay of 98.1 FM and then, at the Daily Adviser Newspaper under Sullay Musa as Managing Editor and Emmanuel as Editor.  Later, he was to join Sheikh Sesay to register the Exclusive Newspaper.

In his quest to use his voice more than the pen, IK left the print in 2002 for the broadcast world.  He joined Radio UNAMSIL to report the 2002 elections.  At the UN Radio, he became a permanent fixture, particularly Saturday mornings where he and Lucien Momoh hosted Salone Party.  This was a music show that put premium on the promotion of the country’s music which was then at its infancy stage.  He also presented current affairs programs like Front Page, Agogo Basket Tea Break and Jika-Jika Sports.

Our new man who will soon be teaming up with then Sierra Leone’s Deputy Permanent Representative to the UN in New York, Osman Keh Kamara to fly high our national colors in Addis Ababa may be young, but his not too broad shoulders have carried many challenges that have not left him weakened but rather, strengthened his resolve for the enormity of the task now at hand.  He still goes to teach his students Investigative Reporting, Broadcasting and Media & Communication Studies at Fourah Bay College.  He served as a member of the Sierra Leone Constitutional Review Committee, a Member of the Board of Governors of Government Model Secondary School, Media and Communication Programmes Adviser to the Mano River Community Development Network (MARICOM) in Liberia, as well as Executive Director of Aureol Media and Communication Consultancy in Sierra Leone.

During Sierra Leone’s search for a development and alternative strategies roadmap for the next 50 years in 2011-12, IK headed the Communication, Media and Outreach Unit of the Sierra Leone Conference on Development and Transformation

He holds several academic laurels including certificates in Peacekeeping and International Conflict Resolution and Global Terrorism.  He is a graduate from Fourah Bay College with a Bachelor of Arts with Honours and a Master of Arts degree in Mass Communication.  He is also currently pursuing the Degree of Master of Philosophy in Mass Communication – FBC.

He is a proud and humbled recipient of several awards including the University Chancellor’s Leadership Award for outstanding leadership ability awarded to him in December 2007.

Critics though question his international and diplomatic credentials but what he may lack in this department could well be compensated for in his strong desire to learn from others, an avid listener and he is well au fait with issues not only in his own backyard but also at the international level.  His experience working also with the UN Mission in Sierra Leone where he met and interacted with people from different backgrounds may have put him in good stead for this new appointment.

He is a soft spoken person and he comes with the charisma that is normally tied to such appointments but I also know that when he speaks and says, “This is very serious” and flips/wags his index finger up and down, then things are really heating up.

Over and above all, IK is a caring guy who has great passion and respect for his family and friends, and above all, successfully married to Mrs. Abibatu Ismael Koroma. Addis, please look out for Deputy Ambassador IK, the Sierra Leonean with a passion for serving Sierra Leoneans and by extension humanity.

Editor’s Note:  The Writer was Editor of Concord Times and now, Head of the Community Outreach Unit – United Nations Mission in Liberia)