In a telephone interview with Sierra Leone’s President, Dr. Ernest Bai Koroma on Saturday, 26th October 2013, His Excellency expressed how he was delighted to have spoken to Sierra Leone pilgrims that have successfully performed this year’s Hajj.

It could be recalled that President Koroma, who is currently in the Federal Republic of Germany on a routine medical check-up, telephoned the Head of 2013 Hajj Team to Saudi Arabia, Hon. Alhaji Moijueh Kaikai last Friday 25th October, 2013 and requested to talk to a cross-section of the Sierra Leone pilgrims himself to enquire about their general status.

The president spoke to over 50 pilgrims, including, some members of the medical team that accompanied the pilgrims, cooks, the elderly, the disabled, religious and traditional leaders, among many others.

He was also very pleased to realize the high spirits of the pilgrims he spoke to.  The pilgrims’ “well-being and satisfaction,” were his major concern, he reiterated.

In the same vein, His Excellency said he was tremendously proud of the Hajj Delegation headed by Moijueh Kaikai and his team for the spectacular job they have done so far.  He characterized their services as a glowing example of patriotism.  He said he has been told by the pilgrims he spoke to how effectively and satisfactorily the Hajj team carried out its functions, and that is what has been most pleasant to him.

President Koroma was also elated to learn that the Head of the Hajj Delegation, Hon. Moijueh Kaikai, his deputy, M.S. Kargbo and a good number of pilgrims were present at the slaughter site to ensure that the number of animals slaughtered conformed to the exact number of the pilgrims.  That act of the Hajj team, President Koroma added, was unprecedented and was an immense source of relief to all the pilgrims and to him as well.  He truly wanted this year’s slaughtering ritual to be totally devoid of all suspicions and doubts; and, thank God and thanks to the tireless Hajj team, the mission was effectively accomplished to the satisfaction of all.

Commenting in general on the exhilarating atmosphere of this year’s hajj, President Koroma wasted no time to express his pleasure with regard to the valuable contribution made by the Embassy of Sierra Leone in Saudi Arabia.  He thanked all the members of the Embassy for the services they were able to render to the Sierra Leone pilgrims.

On a special note, His Excellency commended the selfless and invaluable contribution and services Sierra Leone nationals resident in Saudi Arabia (employees and students alike), have been rendering to pilgrims of their homeland over the years.  He said the roles these bona fide citizens of Sierra Leone play every year are immensely vital to the overall success of the Hajj Mission. T he head of state pointed out that they are the unknown soldiers who work laboriously for the relief of their compatriots anticipating reward from no-one but the Almighty.

President Koroma furthered that the concerted efforts exerted during the Hajj season every year is a clear and tangible example of how best we can stand as a nation to attain our national goals when we work in unison with a sincerity of purpose.

Unity of purpose is one most useful lesson to derive from the entire Hajj process, he stated. He said he wishes that the Sierra Leone pilgrims, (past, current and future ones), irrespective of their various affiliations, would carry this spirit of unity and oneness they have enjoyed during their performance of the different Hajj rituals to their people in Sierra Leone and propagate the message of unity as one people, one nation, and one goal.

He said if Sierra Leoneans in their homeland get united as they do during the Hajj season, he would not have an iota of doubt that Sierra Leone would move forward in all aspects and directions; and, of course, the fruits of such a binding unity would be enjoyed by none, but Sierra Leoneans themselves.

In a message to the pilgrims in the Holy land and to Sierra Leoneans at large, President Koroma emphasized that his success in governance largely depends on the amount of support he garners from all the sectors in Sierra Leone.  Hence, he is asking all and sundry to demonstrate true nationalism in the execution of their assigned duties to their best ability. By so doing, the President said, we will be better off in all domains of vital importance. In this vein, he cited the performance of the 2013 Hajj Delegation as embodiment of true nationalism.

Speaking of the Kingdom of Saudi Arabia, His Excellency showered his unreserved praise on the Custodian of the Two Holy Mosques, Saudi King Abdullah bin Abdulaziz al-Saud and his entire Government for the excellent facilities and arrangements put in place for use by the pilgrims in this year’s Hajj.

He pointed out that the pilgrims performed the Hajj rituals with ease and comfort due to the excellent services and facilities provided to them by the Saudi Government.

He also commended the Saudi Government for the effective security measures it takes annually to ensure the safety of all pilgrims.  The Chief Executive considers the current Saudi Monarch’s era as a golden one, not only for Saudis, but also for the entire Muslim nations, as far as Hajj is concerned. The improvement measures being carried out right now in the holy sites would definitely, after their completion, make future pilgrims more comfortable, His Excellency concluded.

With regard to the limited 30 kg each pilgrim is entitled to, President Koroma has asked the Hajj Mission to inform pilgrims that he will provide a 40 ft container for any excess baggage that pilgrims may have.  Thus, those who can afford to have more than the stipulated 30 kg should go ahead and buy themselves as much as they could afford and be rest assured that their luggage will safely and certainly be carried to Sierra Leone.  What good news!

What does it mean to be saved? 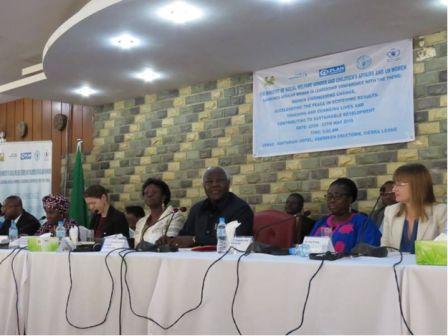 Save the Children Meets President Koroma